Earlier this year Loopmasters came with this new series of tools for DJ’s, appropriately named DJ Mixtools. This series wasn’t the average run of the mill sample and loop packs. Nope, these tools are based on a new concept. Each Mixtool pack contains four complete tracks that are split up in full track stems. This means you can use the complete track in your set or all or any one of the seperate elements of the track, drums, percussion, bassline, synthline, etc. Whatever you want, you decide!

Each track in a DJ Mixtool pack is designed to be equally effective as single elements to enhance a mix, or to work together both in terms of tempo and in terms of musical key and feature progressive grooves, bass and synth parts which evolve throughout the mix as well as massive effects drops, breakdowns and builds.

Each pack is genre-specific and is created by some of the most respected producers in the scene professionally mastered using state of the art analogue EQ, compression and limiting. All DJ MIXTOOLS are ROYALTY FREE meaning they can be legally released as part of a fresh production. 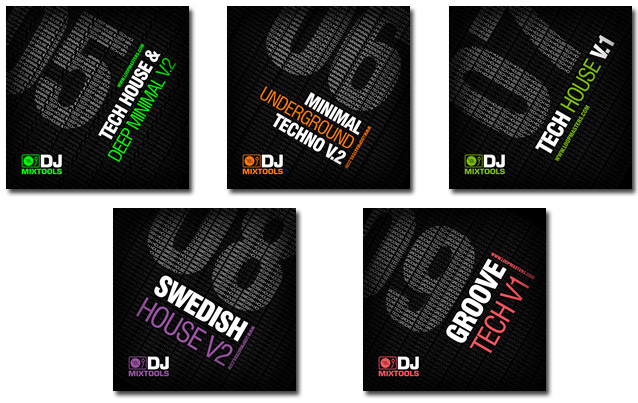 Below are the latests additions to the DJ Mixtools series:

DJ Mixtools 5 – TECH HOUSE AND DEEP MINIMAL 2 gives you four new tracks of delicious Tech House and Deep Minimal sounds, mixed and mastered into club ready track elements, building on the success of the widely popular Volume 1 which was recently released by Loopmasters.

Labels like SCI+TEC and TOOLROOM  have cross the genre barriers between Tech and Minimal House, as well as inspiring DJs to experiment with stems and locked grooves and to re-define the art of the DJ mix.

DJ Mixtools 7 – TECH HOUSE Volume 1 gives you four tracks of delicious Tech House sounds, mixed and mastered into club ready track elements. Labels like Toolroom, Defected, Anjuna Beats, Maquina and Global Underground have inspired this collection which was created by exclusively for us by the celebrated producer Dom Kane , so we expect progressive DJs to experiment with stems and lock grooves and to re-define the art of DJ mixing.

DJ Mixtools 8 – SWEDISH HOUSE Volume 2. Taking inspiration from the big room sounds of DJs and producers like AXWELL, INGROSSO and STEVE ANGELLO etc. this pack features four tracks broken down into progressive stems covering drum grooves, percussion tops, synths, effect builds, breakdowns and drops providing the tools to lift Dj sets and productions in this popular style. Dipping into styles including ELECTRO HOUSE,  PROGRESSIVE and TRIBAL HOUSE with elements that could easily provide the backbone of a new production or that something special to elevate a main room DJ set.

DJ Mixtools 9 – GROOVE TECH Volume 1 takes inspiration from what is being called “The New Sound Of Ibiza”  and is without doubt the freshest House sound of the year.   Moving away from harder and tougher sounds that have dominated the club scene in recent years, and following the trend for tunes that have really solid and infectious grooves with original and innovative percussive elements that work in a main room just as well as the backroom.