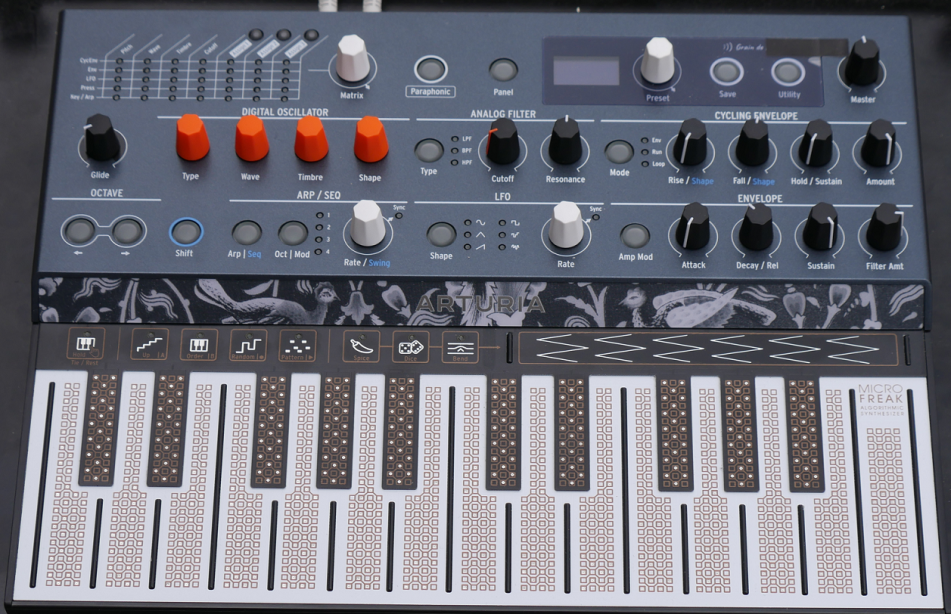 Arturia released a fun little hybrid synth that has an excellent price performance ratio. While playing with this rascal the same enthusiasm flares up similar to a Teenage Engineering OP-1. They both share a quirky look and a not so conventional synthesis engine. The digital oscillator can be tamed by an analogue SEM type filter. With the sequencer and mod matrix you’ll get a broad range of sonic possibilities to explore.

Oscillator
The oscillator is driving force of the Microfreak and give it it’s brawny sound that can pierce though the mix with ease. It has 12 type of digital synthesis including some of the open source software from Mutable Instruments. So, in that regard it resembles sonically a lot like the Mutable Instruments Plaids but also Shrutti or Ambika. These 12 types of synthesis very a lot and they all have this harsh digital sound. The odd one out would be the chord option that allows for some interesting chord progressions. Since you have a paraphonic option for up to 4 voices as well you can combine that with the chords and create big chords. The difference of level between monophonic and paraphonic is noticeable but you can adjust the output level accordingly.

Analog filter
The filter is an analogue SEM type of filter that has 3 modes LP,BP and HP. It works very nice to tame the harsh digital sounds of the oscillator. For an SEM type filter, it does much more self-oscillation that a regular SEM though. Maybe a MS-20 type filter would have been nice as well but it may be to screamy to be combined with the digital oscillator. A Steiner-Parker filter would be simply too much for sure.

Envelopes
You have two envelopes. A generic ASDR and an envelope that can be looped like a west-coast envelope shaper with adjustable rise and fall shapes. You can use it as a dedicated filter envelope or in the modulation matrix as an additional LFO. The current LFO is a bread and butter LFO that is also sync able.

Mod matrix
The mod matrix is a good example of how with the single selection and pressure sensitive button you can select a patch point and dial in the amount. You additionally have 3 free assignable slots so you can select any parameter you want to have modulated. Come to think of it that this kind of modulation patching would have been a godsend on your typical vintage hybrid synths like the DW8000 or Bit99 that used a number system and just one data slider.

Arpeggiator
The arpeggiator is your typical bread and butter arpeggiator with different modes and up to 4 octaves and can be synced to the global tempo. If you like the arpeggiator you can copy it to either sequencer pattern A or B.

Sequencer
This sequencer has two patterns for every patch including 4 automation tracks and can have up to 64 steps. You can alternate between the two patterns and create more variation that way. You cannot have pattern A play and edit pattern B at the same time. You can edit the current pattern at real time and work that way in a live environment. You also can edit the patterns in a stepped way and edit the modulation parameters. In the utility section you can smooth the modulation settings. Additionally, you have two additional options for adjust the sequences with the spice and randomize functions.

Keyboard
The keyboard quite unconventional and resembles more like a Buchla type of interface with conductive layers that act as keys. You even can use aftertouch by covering a key more with your finger. Playing it is a bit finicky though since it’s easy to hit adjacent keys just like with the Roli keyboards. You can use either USB or midi to use another midi keyboard if you like that better.

Connectivity
Next to the unbalanced mono jack output you have a 3,5mm headset output. You have midi in and thru where the thru has a merge option. USB allows for midi but also can be used to power the Microfreak. Use a power bank and a headset and you can go anywhere. Additionally, you have CV outputs for gate, V/Oct or V/Hz and pressure and additional clock in/out.

Presets
Unlike the latest Arturia softsynths the Microfreak has actually more than decent presets that show it versatility. Some of them are instant usable as intro for a song or could fit right into a Hip-Hop beat. In total you have room for 256 presets and can overwrite the 160 presets if you like your own presets. 256 presets imply that it does not respond to program changes

Let’s face it that the Microfreak is an extremely versatile synthesizer and has a lot of options that are great in their context. Yes, it has a plastic case and the keys are quite odd but you can another midi keyboard.
An analogue input would have been great as well as an effect section. One option I would like to see added would be that you can use the second sequence pattern as a dedicated CV output.
Combine it with a looper and a reverb and you get a very powerful combination of elements to create tracks at the get go. Hook it up to a DAW and use it as a swiss knife for simple bread and butter sounds to quirky FX. Recording and resampling will extend the sonic range with ease.