Line 6 is proud to announce a dozen new apps for the MIDI Mobilizer, the only MIDI interface for Apple iPod touch, iPhone and iPad.

“Developers are doing an amazing job of harnessing the power of the Apple devices and turning them into serious music-making MIDI machines – all made possible by MIDI Mobilizer,” remarked Chris Grigg, Mobile Products Manager at Line 6. “Prepare to be completely amazed at how much you can do with such tiny, affordable gear.” 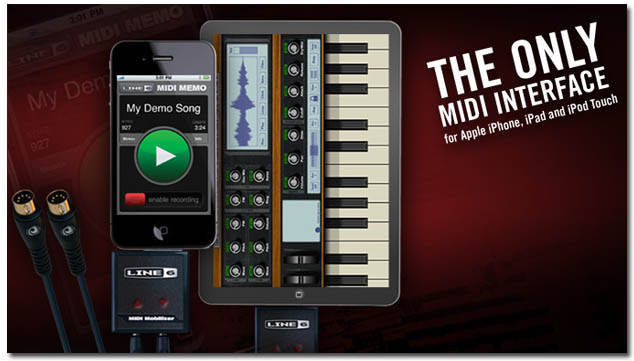 MIDI Mobilizer is the most simple, compact, and portable Line 6 device yet. It easily connects directly with any Apple iPod touch, iPhone or iPad and coupled with MIDI Memo Recorder (a free app available for download on the Apple App Store), it allows musicians to conveniently play, record, and backup MIDI data any time, anywhere.

NanoStudio, for example, is a techno-styled, full-featured virtual recording studio complete with 16 sample trigger pads, a comprehensive sequencer, a sample editor, a mixer and 10 FX units. Another is NLog Synth PRO, which is a professional virtual analogue synthesizer with 192 factory sounds, powerful synth features, and more. Pianist Pro, an 88-key virtual piano for the iPad, has been highlighted in Apple commercials and recommended by the New York Times, Rolling Stone magazine, and others.

These apps are just the beginning – many more are in development and will be available soon.

MIDI Mobilizer is available now, with an estimated street price of $69.99.