We’ll have to wait a little bit longer but the new polysynth ‘Phosphor‘ from Audio Damage is almost ready. Just a few more weeks till release, the UI is one thing that’s finalised already. And it’s looking good! 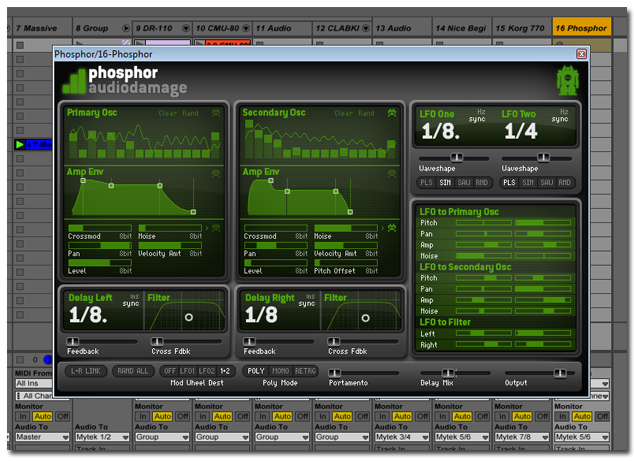 Here’s what Chris has to say about it on their Analog Industries blog:

“Unfortunately, you won’t be able to get Phosphor for yourself on Christmas; we’re still a couple weeks away from release. But here’s an early present for you: the whole UI. This is subject to change as we get further along in to a wider beta, and I may touch up some things in the graphics here and there, but I’d say this is 95% of what the finished product will look like at this point.

(Obviously, all those little “8bit” text entries will be the value displays for the various sliders. I say “obviously” in the hope that the first question wasn’t “what are all those little 8bit entries?”)

What it is: a two-oscillator 16-voice polysynth loosely based upon the topology of the alphaSyntauri additive synthesis add-on for the Apple ][+ and //e. We’ve added some modern features like the delays and mod routing, mono modes, and a “clean” setting for the sine waves and noise, in order to extend the capabilities of the synth past its original limits. But this plug is mainly designed for recreating the alphaSyntauri, and at that, it excels.

I can’t give you a release date, and we haven’t decided on a final price, but it will be in line with our other offerings. VST on Win and AU/VST on Mac, of course. Intel Macs only, as with all our recent products, and 10.5 or greater required. 64-bit on Windows. You know the drill.“