SSL recording consoles have been used to mix more Platinum-selling records than any other desk. The SSL E Series Channel Strip plug-in for UAD-2 is the result of Universal Audio’s painstaking circuit emulation of the esteemed SSL 4000 console, complete with both the Type E “black knob” and “brown knob” four-band EQ — widely held to be the favorites in SSL’s signal processing lineage. Other features include high and low cut filters, and independent Expander/Gate and Compressor/Limiter. 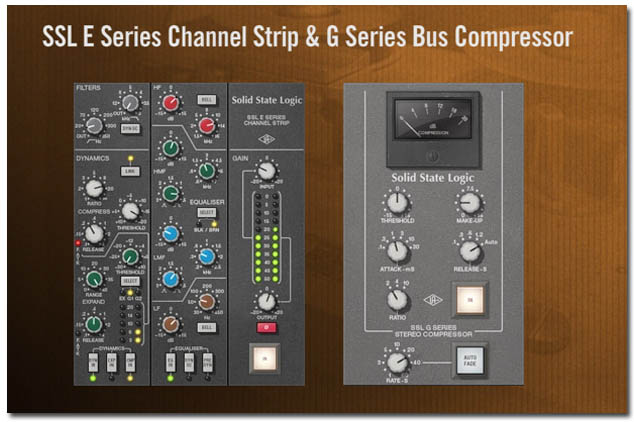 The perfect complement to the E Series Channel Strip, the SSL G Series Bus Compressor emulates the center section console dynamics from the SSL 4000, in all its hit-making glory. This plug-in features the same simple control set and transparent compression characteristics of the hardware version, including its famed ability to “glue” together a mix. With SSL’s direct involvement, UA has captured the essence of this iconic device with exacting accuracy — right down to the Auto Fade control.

“These are the SSL plug-ins we always wanted to build,” enthused Matt Ward, President of Universal Audio. “We love working directly with our plug-in partners, as there are always little tips, tricks and stories behind the development of the classic products we emulate. This becomes a critical part of the authenticity of our models, and SSL has been a huge help in this regard. We couldn’t be more excited to have the support of SSL in developing the most accurate and flexible emulations of such well-loved and respected equipment.”

“With a little help from our guys, UA have gone to a lot of trouble to get the E Series Channel processors and G Series Stereo Bus Compressor just right and we are delighted that these faithful emulations are now available on the UAD platform. UA’s respect for authenticity is the sound basis on which this new relationship is founded.” Antony David, Managing Director. SSL.