As the name implies, the DrumXchanger from SPL, exchanges your drums. One of a billion dumreplacers you may think, but SPL made some things different from the others, as they say themselfs, ‘It’s not merely a sound replacer. It is, in fact, a powerful tool to optimize drum tracks’. The drumXchanger has got two Transient Designers and a unique way of drum detection. 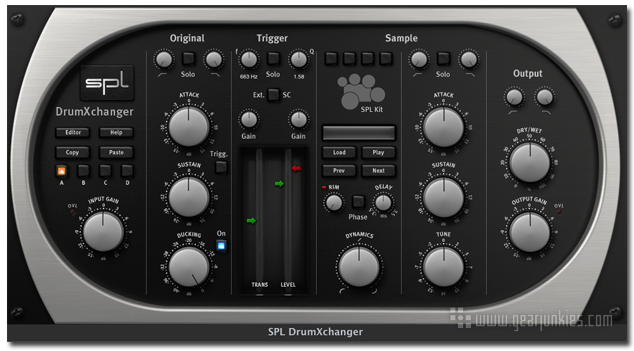 The issue I needed to read the manual for, was the area in the middle (trigger), this is where the drumXchanger seperates itself from other drumreplacers. Other drumreplacers react at peaks in the audio, by only doing that, you’ll sometimes get a wrong replacement. The drumXchanger uses a 2nd treshold, called the ‘transient treshold’. This is a treshold on a different signal wich has gone through a filter (wich you can adjust to only get the usefull frequencies out of it). When both tresholds are being passed, then the drum is going to be replaced.

But with what are they going to be replaced?
The drumXchanger comes with 4 drumkits, wich all have got one bassdrum, one snaredrum and 4 tomtoms. 4 drumkits sound doesn’t sound like it is much, but with the transient designer and the button ‘RIM’, you can make allmost every possible drum sound. If this still is’nt enough, you can also add sounds in the editor.

RIM and Delay
The harder you hit a drum, the more (side) noise you’ll get, these sounds are called RIMshots. The drumXchaner can add RIM to the sample, you can set a treshold for when these RIM sounds come in by adjusting the red arrow. You can then set the knob rim to the desired amount of rimshot you want.

Conclusion
At first I wasn’t really impressed with this plugin. It took me a lot of effort to get the drumXchanger working as I wanted it to. Another point of slight disappointment was the availability of only four ‘drumkits’. Four seems to be … not much!

After using the software for a couple of weeks my thoughts changed however. Because with the drumXchager the only limiting factor is your own creativity. With these four drumkits you can create more sounds then I initially thought. As every multisample is made up of up to 80 sounds with sixteen dynamic levels and five variations, … well do the math! And if you still don’t find the sound you want, with the SPLX File Editor you can make your own multisamples and import external samples in WAV and AIFF format. The drumXchanger software is priced at 150 Euro, which I think is justified as it stands out of the competition drum replacement software.

A little demonstration of the software in part two!