If you don’t mind the Nintendo-ish, PSP-ish looks, the KDJ-ONE is another ‘gadget’ that can be an alternative to an iPad with music apps. The KDJ-ONE provides a completely portable and wireless handheld production environment featuring an advanced synthesizer, sequencer, and multitrack audio editing with ACIDized WAV support. 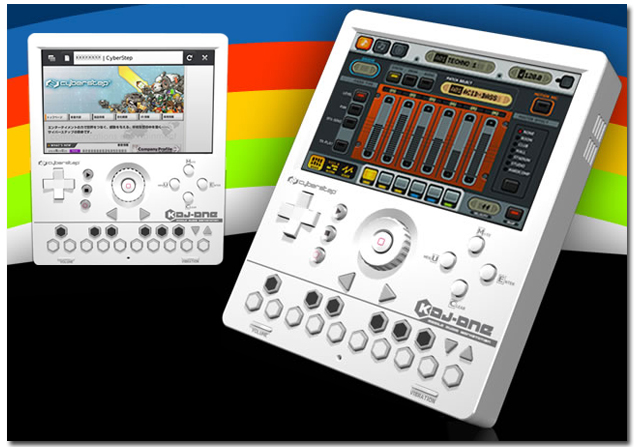 The KDJ-ONE features combination of multi-touch screen, keypad, and jog dial allows for a fluid and intuitive control system unlike that of any existing hardware or software. Its runs Intel MeeGo Handset Edition as its OS, and supports all of MeeGo’s features including web browser, Skype, media player, and more. This new digital audio workstation is built-in KDJ2 Synth features 10 synthesis algorithms, 20 effects, 7 filters, and 4 modulation units including step modulation, which delivers an indispensable tool when creating electronic/club style tracks.

Further features include ACID formatted samples may be loaded directly into KDJ-ONE’s audio tracks and time-stretched just as in ACID, creating a whole new world of possibilities; likewise, patterns created with the KDJ-ONE may be exported directly to ACIDized WAV format. The 6 track pattern sequencer includes automation/motion sequencing, loop recording, step recording, piano roll, and all other standard sequencer features.

The KDJ-ONE also features a Unique Song Mode allows DJ style mixing of two patterns in real time and may be used as a VST via built-in wireless LAN; internal settings and data are also editable from the computer. The high precision “QW” vibration system sends vibrations from your music directly to your fingertips, adding a whole new element of force feedback to your music production experience; the vibration system even works with KDJ’s built-in games.