Celemony releases version 1.1 of its professional recording restoration software Capstan. Starting from the analysis of just one audio file, the new version makes it possible to remove identical wow and flutter from an unlimited number of additional audio files. At the same time, the introduction of a rental model brings Capstan 1.1 within the budgets even of home studios. 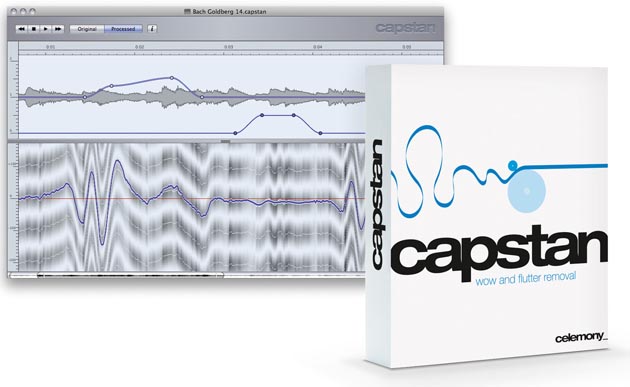 Capstan 1.1 is now capable of transferring the correction of wow and flutter from a mono or stereo file to additional files, thereby removing identical wow and flutter from multi-channel or multi-track recordings. This new feature is seamlessly integrated into the Capstan interface and there is absolutely no limitation on the number of files that can be repaired in this way.

To allow as many people as possible to benefit from Capstan, Celemony is offering a limited-period iLok license for the application from version 1.1 on. This means that as an alternative to purchasing a full license, anyone interested can rent the software for 5 days at the price of US$/€ 199. This will allow even small studios and hobbyists to take advantage of Capstan’s unique functions for the removal of wow and flutter – to restore cherished recordings from the rehearsal room, for example, or from the old home studio days, and preserve them for posterity.

Capstan is based on Celemony’s patented DNA Direct Note Access technology and makes it possible to remove wow and flutter from recorded music regardless of the medium (magnetic tape, vinyl, etc). In this, Capstan is superior to other, bias-based solutions, as Capstan still works even if the tape has been copied several times or digitized in low resolution. Capstan has already proved its worth by rescuing a variety of valuable recordings, and among its users are such renowned mastering and recording studios as Audio Mechanics and the msm Studios as well as a number of broadcasting corporations.