The new series (V61, V49, V25) combine velocity-sensitive keys with eight drum/trigger pads, allowing virtual instruments to be played with dynamic expression. Cool blue LEDs illuminate the pads—as well as the four assignable knobs and buttons—for positive visibility. Assignments may be made quickly via the MIDI Learn feature. Octave shift keys provide access to the entire note range. A single USB cable provides both a power and data connection to nearly any computer.

This series (VI61, VI49, VI25) add semi-weighted keys and aftertouch. The pad count has been increased to 16, with multi-color illumination. This layout provides intensive command over the clip trigger workflow of top DAW and compositional software. The internal clock offers drum roll, tempo, and sync capabilities. An optional power supply and a standard MIDI output allow for stand-alone use. 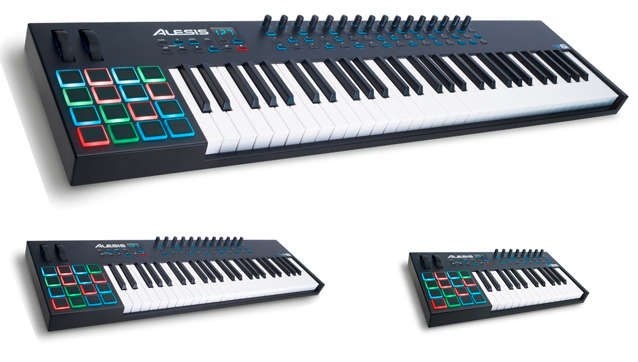 “Our goal with the new V and VI series keyboards was to focus on live performance and studio workflow in an intuitive yet advanced way,” notes Alesis Product Manager Nate Lane. “The keys, pads, knobs, and buttons have an excellent, player-worthy, high-quality feel, and we developed an accompanying software editor to allow users to take a deep dive into defining preset and parameter configurations if they choose to do so.”