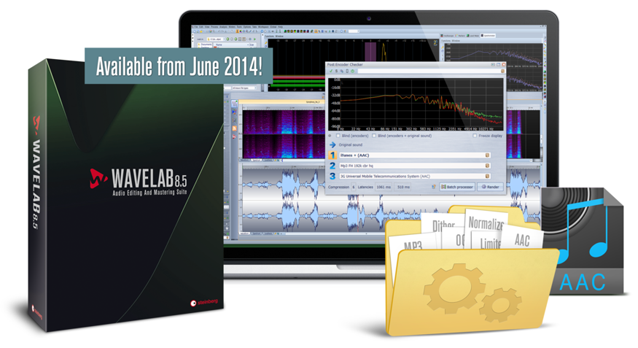 “This update marks an important step forward for the eighth iteration of WaveLab, focusing this round on encoding and processing audio files in a most efficient way,” said Timo Wildenhain, product marketing manager at Steinberg.

The new automated Watch Folder rendering feature applies processing to all audio files drag-and-dropped into designated folders. Users can now assign tasks, such as dithering, normalization, plug-in rendering and audio file format conversion, to any number of Watch Folders without having WaveLab open. Putting a big emphasis on working with codecs, WaveLab 8.5 sports the new Encoder Checker plug-in for real-time comparison of codecs and settings, with an FFT graph allowing for a precise analysis of the compressed sound quality. WaveLab now also supports encoding to the AAC file format to ensure compatibility with iTunes and related Apple hardware. Introducing new multi-format rendering capabilities facilitates exporting files to various formats simultaneously, and with much more ease than in previous versions.

The WaveLab 8.5 full retail version will be available from June 2014 as boxed version from authorized Steinberg resellers and through the Steinberg Online Shop. The suggested retail price is 549 euros, including German VAT.