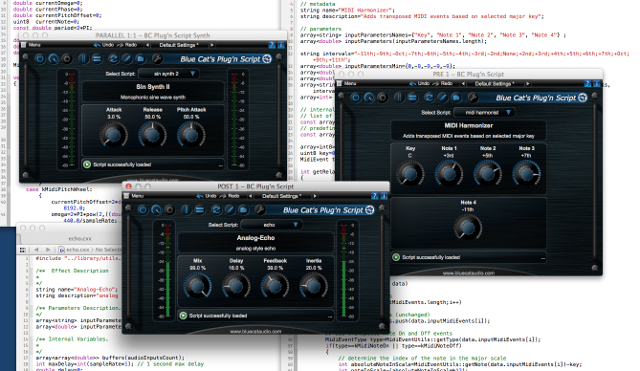 With this plug-in, it is possible to write your own real time or offline processors or instruments, with very little knowledge about programming: it is a very simple way to start learning audio and MIDI processing. Experienced audio software developers will also find it convenient to quickly prototype algorithms right into a DAW and drastically reduce development costs. It can also be used by non-programmers as a multi-purpose processor, thanks to the 46 scripts and 120 presets that are included in the package.

The plug-in is available alone or as part of the Blue Cat’s All Plug-ins Pack, the complete Blue Cat Audio collection bundle. A special introduction price (25% off the plug-in) is offered to new customers until October 15th, while existing Blue Cat Audio customers will receive by email special offers to purchase the plug-in. Demo versions are available for VST, RTAS, AAX, Audio Unit and DirectX formats, for both Mac and PC (32 and 64-bit).

– Build your own Audio and MIDI effects or virtual instruments.

– Up to 48 input parameters and 32 outputs, with full MIDI and automation control.

– Use your favorite Integrated Development Environment (IDE) for editing.

– Integrated JIT (Just In Time) compiler for optimal performance (scripts are not interpreted but compiled).

– Surround support (up to 8 audio channels).

– Use the included user interface or write your own for your own scripts.