Additional MachFive enhancements include the ability to import Kontakt soundbanks, as
well as REX (Recycle) version 1 and 2 files. MachFive automatically maps each audio
slice in a REX file to consecutive keys on the keyboard for convenient sample-style
triggering. Both of these new features are also being made available to MachFive/Mac
users as a free Version 1.08 updater, now available at www.motu.com/downloads.

MachFive is now available for both Mac OS 9/X and Windows 2K/XP at a suggested retail
price of $395. 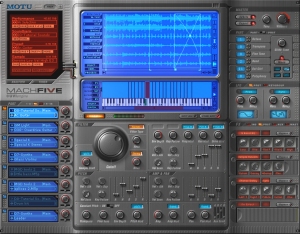