Guitar combos is a series of three charismatic amp emulations that
combine studio-grade sound quality with maximum ease of use. All three
combos consist of a classic tube amplifier with a speaker box and
several integrated effects, giving musicians and producers
straightforward access to a wide range of pure and highly musical
guitar tones in software. 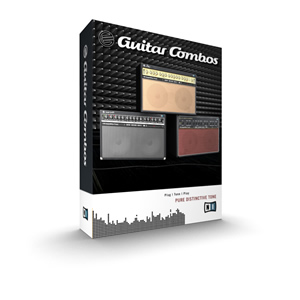 Guitar combos are based on the critically
acclaimed “Dynamic Tube Response” technology from Guitar rig, and
offer the same striking authenticity and unrivaled playing dynamics
that made Guitar rig the new standard in software-based amp modelling.

The Guitar combos series consists of the Twang combo, the AC box combo
and the Plexi combo.

The Twang combo is modelled after the Fender Twin Reverb and delivers
a wide range of clean and crunch tones suitable for Pop, Jazz, Blues
and Country styles. It is combined with a 2×12 cabinet emulation and a
tube condenser microphone, and includes an overdrive pedal as well as
chorus, vibrato, and spring reverb.

The AC box combo is modelled after the Vox AC-30 and delivers a wide
range of clean and crunch sounds that lend itself to Pop, Rock, and
Alternative styles. It is combined with a 2×12 cabinet emulation and a
vintage condenser microphone, and includes a treble booster, tremolo,
and spring reverb.

The Plexi combo is modelled after the Marshall JMP50 and delivers a
wide range of crunch and overdrive sounds, which makes it the first
choice for various flavors of Rock, Metal and Psychedelic. It is
combined with a 4×12 cabinet and a dynamic microphone, and includes a
fuzz overdrive, distortion pedal, and a reverse delay effect.

Guitar combos are ready for a wide range of live, studio and practice
applications thanks to an integrated high-precision tuner, noise gate
and limiter. Also integrated is a Demo Player with a selection of
unprocessed guitar loops for convenient tone tweaking. Each combo
comes equipped with dozens of carefully chosen presets and offers 64
preset slots that can hold custom tones.

Guitar combos can be used both standalone and as plug-ins in all major
host sequencers. The combos can be controlled via MIDI, which allows
for remote preset switching and real-time parameter control using a
MIDI foot pedal as well as parameter automation within a sequencer.