Sagan Technology has recently released a pre-release of their Metro Sequencing Audio Software (version 6.3.1). Upgrades from 6.2 are free. All new purchases include access to this version. There is an upgrade price of $29.99 to upgrade any flavor of Metro from 6.x to 6.3. Metro Documents written with this version will NOT be readable in any version prior to Metro/Metro SE version 6.3. This pre-release (Metro and Metro SE) still works under OS 9 but Sagan is no longer providing Tech support for OS 9. 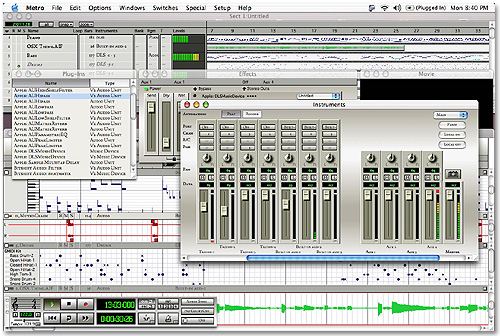 The following list includes changes to Metro, Metro SE and Metro LX. Some changes may not be applicable to specific products.

New to this version:

• New: Drag and Drop has been vastly improved so that you can drag a MIDI or audio file to a precise time and track in either the graphic editor or Tracks editor. This makes working with plug-ins like Stylus RMX and iDrum much less complicated. This will work for both type 0 and type 1 MIDI files but type 1 MIDI files must contain only a single track. If multiple files are dragged or a type 1 MIDI file with more than 1 track is dragged the destination will be either a new track or a new section. Drag and drop to the graphic editor in this way is automatically quantized to the nearest bar as indicated in the upper left of the graphic editor.

• New: Stationery documents are back. Metro detects any document with an extension of .msd as a Metro Stationery Document. This will allow users to load in the document but the document will not set the current filename. This means that save will bring up a ‘save as’ dialog preventing the original document from being implicitly overwritten.

• New: The jukebox will not scroll to the active playing song if playback scrolling is in edit mode.

• New: Standard bank select MIDI controllers (0 and 32) are recognized when passed through MIDI thru and presented in the graphic editor.

• New: In the Rhythm Explorer pattern algorithms there is a 13% chance that a given pattern will search for a drum track and groove quantize to it. If the option key is held when generating patterns the chance rises to 100%.

• New: Auto detection of soft-synth bank and patch changes (for plug-ins like Absynth 3). If a patch is changed within a plug-in’s user interface, Metro does a better job by noticing it and keeping the current program name display in sync.

• New: Multiple instances of plug-ins are now more aptly named. For example, the second Absynth 3 instance will be named Absynth 3-2 instead of Absynth 4.