In a move that provides Pro Tools users even more incentive to add the most powerful plug-in bundle to their HD rig, Eventide announced today a $200 limited-time rebate for the Anthology bundle. The rebate, which runs from July 1 through September 30, 2005, gives any Eventide plug-in or Digidesign MassivePack owner, cash back on the bundle that combines over three decades of legendary effects into one comprehensive offering. 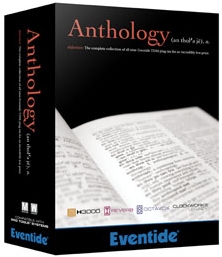 “The Anthology bundle, with every Eventide plug-in available, is the total package for any Pro Tools user,” said Eventide vice president of sales and marketing, Ray Maxwell. “The bundle pulls together the best of 30 years of groundbreaking Eventide effects in one affordable bundle for Pro Tools users. Purchased separately, these plug-ins would cost $2,875. Anthology lists for $1,195. The limited-time rebate takes a great deal and makes it impossible to resist. It’s a powerful suite of plug-ins with character that you can only get from Eventide.”

Included in the Anthology bundle are H3000 Band Delays™ and the just released H3000 Factory™ plug-ins. Factory offers the ability to patch together any combination of 18 effects blocks; creating your own complex multi-effects has never been so easy. Band Delays offers eight voices of tempo-based parametric filtered delays, each with pan, delay, and level controls. Factory and Band Delays are based on Eventide’s best-selling H3000 and they offer its unique Function Generator featuring 19 waveshapes, MIDI control, and all delays lock to system tempo.

To claim the rebate, you must be a registered Pro Tools HD owner, have purchased any Digidesign MassivePack or any other Eventide plug-in, and have purchased the Eventide Anthology bundle from an authorized Eventide dealer between July 1 and September 30, 2005. The purchaser must submit to Eventide a completed rebate form, the original Eventide UPC barcode label, and original sales receipts for both the Anthology bundle and the Digidesign MassivePack or other Eventide plug-in. For all official rules and information, please visit www.eventide.com/rebate. The new Anthology bundle is available through Eventide, authorized Eventide dealers throughout Canada and the United States, and through all Digidesign Pro Tools retailers internationally.