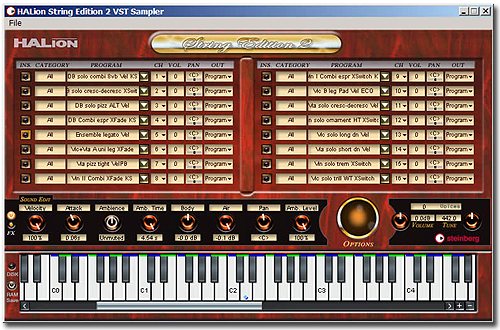 HALion String Edition 2 includes 9 GB of sounds performed by one of Europe’s leading orchestras, which was recorded in 24-bit and using top grade recording equipment. Included are solo and ensemble strings in a large variety of articulations including, crescendo, trills, up and down bowing, portamento and many more. HALion String Edition 2 also features RealAmbience, a new technique that offers a full, 3D concert hall sound with no artificial reverb.

HALion String Edition 2 offers several technologies to maximise efficiency in its use of the computer’s CPU and RAM resources. First seen in Steinberg’s award-winning HALion sampler, RAMSave™ unloads unused samples from RAM, freeing up memory for other instruments and applications. The supplied ECO versions of sounds allow high levels of polyphony even on older computers, while the advanced disk-streaming mode makes HALion String Edition 2 highly efficient in its memory use.

HALion String editon 2 is to be released in august 2005. Information on pricing is not yet released.