ReBirth is dead, long live ReBirth! Ladies and Gentlemen, Propellerheads hereby announce that ReBirth is officially discontinued. September 1, 2005 marks the end of the ReBirth era, and they are celebrating this by opening the ReBirth Museum to commemorate its history. 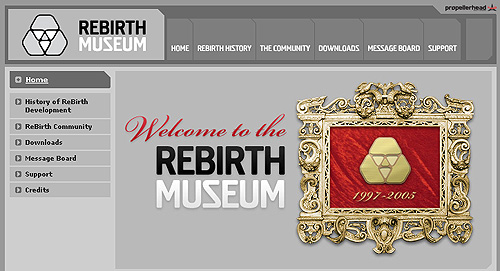 To fill the gap left by the now discontinued ReBirth application, Propellerhead Software presents the ReBirth ReFill! A 100 mb monster ReFill that not only recreates the drum sounds of the original application, but also of all of the Mods that were available on the Propellerhead website.

Propellerhead Software’s ReBirth RB-338 pioneered a new era of music instrumentation that merged the principles of “virtual reality” with historic synthesizers and drum machines. This concept seemed impossible at the time, but has since become a common trend in music software.

The free Rebirth Refill is available at the Propellerheads website. For more ‘historic’ information on Rebirth check out the Rebirth Museum.