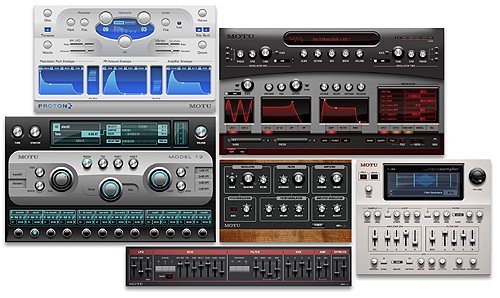 The new virtual instruments are:
– BassLine is a one oscillator, two-waveform monophonic bass synth that lets users quickly dial up that perfect analog bass sound. It has a streamlined design consisting of two waveforms (saw and square), one low-pass filter with cutoff and resonance, simple decay envelopes for the filter and amplifier and several additional classic analog synth features.
– PolySynth is a polyphonic synth with a distinct look that harkens back to the classic Roland Juno 106. PolySynth is capable of a much wider variety of sounds than BassLine, thanks to its digital controlled oscillator (DCO), which can be adjusted with varying amounts of de-tune, triangle wave, sawtooth, rectangle (square) wave, sub-oscillator 1 & 2 and noise. The single LFO can modulate pitch (for vibrato), pulse width (for the square wave and sub-oscillators) or filter depth (for the classic “wah” effect, among others). The resonant low-pass filter is equipped with frequency and resonance controls, key tracking, velocity control and an ADSR envelope, which can also be applied as an overall envelope for each note. Chorus and distortion provide plenty of punch for the thickest of pads and searing lead lines.
– Modulo provides two oscillators plus noise, 58 available digital waveforms for each oscillator (including sine, square, saw, rectangle, etc.), oscillator phase and symmetry modulation, two LFOs, a resonant multimode filter, three envelopes (for the amplifier, filter and general purpose modulation) and a 5×7 modulation matrix, which supplies five sources applied to up to seven possible destinations. With built-in bank and patch management features and dozens of clearly organized presets, Modulo provides users with accessible yet limitless possibilities for analog synth sounds.
– Nanosynth allows users to drag and drop any sample (up to five seconds long) from anywhere in DP (or from the Mac OS X Finder) into its graphic sample display and then set a start time, end time, loop (if desired) and crossfade. A multimode filter, amplifier envelope, filter envelope and LFO provide all of the essential features needed for basic sampler programming. Nanosynth is highly CPU-efficient and the user can open as many instances of it as they need during a project to play back an infinite variety of sampler sounds.
– Model 12 is a twelve-part drum module. Hundreds of supplied drum sounds and dozens of drum kits can be quickly loaded into its twelve drum parts, which can be individually programmed with controls for pitch (formant corrected or conventional pitch shifting), time stretch, duration (decay or gate), volume & pan, two sends, and a resonant multimode filter with drive. Modulation of many of these controls is available by dragging controls in the virtual LCD display at the top of the window.
– Proton is a two-operator frequency modulation (FM) synthesizer that delivers classic, bright, shimmering and expressive FM synth sounds. The pioneering Yamaha DX7 delivered a wide range of sounds using only sine waves with six operators. Proton delivers an equally broad palette of sounds with a streamlined 2-op architecture driven by a simple wavetable knob, instead of the added overhead and complexity of additional operators. A real-time display in the center of the window shows the user the spectral content or periodic waveform being generated by the current settings. Additional controls include an FM LFO, modulation pitch envelope, FM amount envelope and overall ADSR envelope.