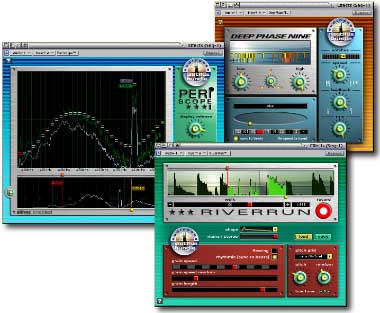 The Nautilus Bundle (for Mac OS X: MAS VST RTAS HTDM AU Audio Suite) consists of the following three plug-ins :
RiverRun – is a Granular Soundscape Synthesizer capable of oozing immense sonic oceans of tiny particals taken from your original audio. It can build rhythmic textures, wide harmonic soundscapes, and it can zoom in on your fragment by stretching it by a factor of up to 200.

PeriScope – Look at the audio spectrum via the real-time animating spectroscope, or graphic analyzer, and grab faders where you see the audio happening. Phase Correct EQ, with surgical precision, and unprecedented low frequency resolution. Edit modes range from fluent to massively steep.

Deep Phase Nine – is a true phaser that offers unparalleled control and visual feedback. Up to 24 notches per channel, beat locked sample and hold, one-shots, a true phaser (Not a flanger !) done the Audio Ease way. 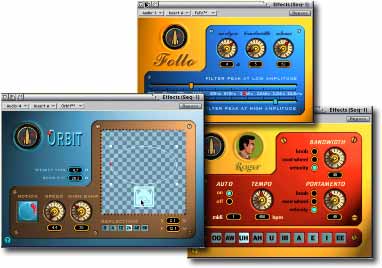 The Rocket Science (for Mac OS X: MAS VST RTAS HTDM AU Audio Suite) consists of the following three plug-ins:
Roger – You can apply human vowel filters to your audio with Roger. Use the vowel bar at the bottom to click through the vowels and click the portrait to select one of the Roger family members. Features include portamento, automation, Midi-controll and rythmic talk-nonsense mode.

Follo – Dynamically adjusts the peak of a resonating bandpass filter according to the level of the incoming audio. Applications of Follo include an autowah on a guitar, and a thumping resonating bass generator.

Orbit – Orbit lets you control the virtual position of your sound source. It accurately calculates the sound source’s reflections of the walls of a virtual ‘outer room’, using the exact amount of delay and attenuation for the direct sound and all reflections alike. Useit a s a physicallly correct panner, select from preset source trajectories, or create them yourself via live midi controll or parameter automation.

The new versions are free upgrades for Rocket Science version 3 and Nautilus version 2 users, and can be picked up from Nautilus.