TerraTec Producer presents WAVEXTABLE VI, the new virtual instrument in the Producer range with more than 128 sounds and drumkits for modern music production. KONTAKT PLAYER 2, powered by Native Instruments, enclosed provides impressive sounds and is the technical reference under Windows or Mac OS, as a plugin or stand alone. 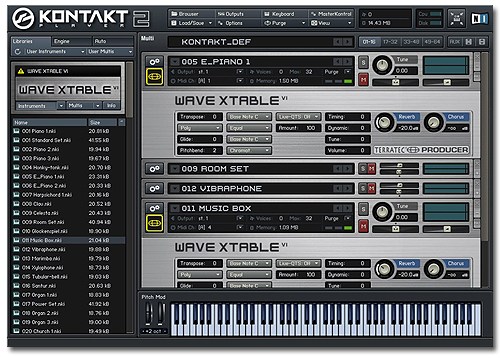 The 128 individual sounds of the WAVE XTABLE VI sorted according to the GM assignment, can be played simultaneously via MIDI on 16 channels and are thus suitable for the high-quality playback of GM-, GS- and XG-compatible MIDI-files. Even the patch changes included in many songs, as well as controller commands e.g. for filters, envelopes and even effects (reverb & chorus) are correctly interpreted and reproduced.

As a technical platform, TerraTec Producer has selected the powerful KONTAKT PLAYER 2 from Native Instruments, which provides practically unlimited polyphony, Direct-From-Disk (DFD) streaming technology, as well as compatibility to all common plug-in standards under Windows or Mac OS X. And if you “just want to make music“, you can even start directly without a sequencer, since the WAVE XTABLE VI can also be used in stand-alone mode.

Priced at 149 USD (MSRP), WAVEXTABLE VI will be available right after NAMM Show 2007.