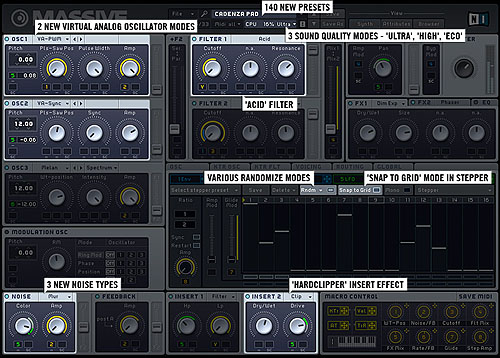 The new “Acid” filter is modelled after a famous monophonic bass synthesizer, and expands the sonic spectrum of MASSIVE with characteristic biting leads and squelchy bass sounds, bringing the total number of available filter models up to twelve. Furthermore, the new “Hardclipper” effect adds an especially radical flavor of distortion to MASSIVE’s
versatile arsenal of high-quality effects.

MASSIVE 1.1 also includes additional wavetables and noise oscillator modes, a new randomize function for envelopes and modulators, and a wide range of usability improvements, as well as an expanded sound library with over 140 additional presets.

Since its release, MASSIVE has already received several renowned industry awards, including the Keyboard KeyBuy award, the Future Music Platinum Award and the Remix Technology Award 2007 for “Best Software Synthesizer”, while Sound On Sound magazine has called MASSIVE “a synth that sets the new benchmark for virtual instruments”.

The 1.1 update for Windows and Mac is now available as a free download for all registered users of MASSIVE on the NI website.