Finally it arrived! The first official Traktor controller from Native Instruments themselves. This thing is a monster in a tight little box! Never have I used a midi/DJ controller that was so easy and quick to figure out.

The first feature that caught my eye when opening the packagebox was how flat it looked. The controllers I have used, before the X1, were almost all big and robust. But not this X1. I would have preferred it a bit higher so it would fit better in my DJ booth. You need a platform to make sure it is level with my mixer and players. There is a platform optional for sale, and that is the carrier bag for the X1…

The X1 is as high as a NI MASCHINE. They fit very nicely next to eachother. Allthough there is one flaw. The MASCHINE’s surface is slanted, where the X1 has a straight surface. But the design makes up for that It looks just really good! Just as we could expect from Native Instruments after the MASCHINE and KORE. 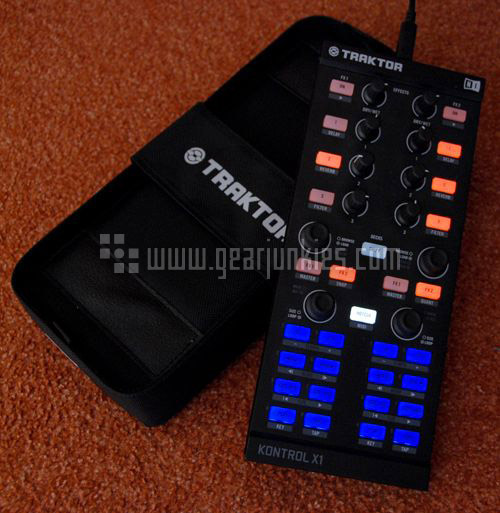 The buttons of the X1 for starting your tracks, stop, CUEing and looping are blue lit. When pressing a button it lits up more brightly blue then the other buttons. These settings can be changed to your own preferences within Traktor. The effect buttons are lit red and work the same as the blue ones. 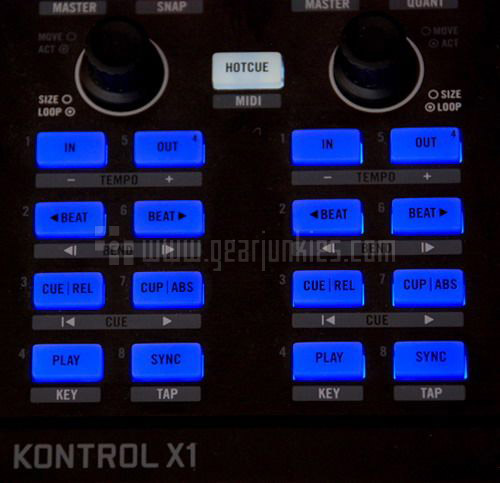 The function of the Play/CUE/CUP/Sync buttons speaks for themselves. Still I want to discuss them a bit more. The Play/pause buttons and Loop buttons control your track, but a little downside is that they are slightly too small I think. It would have been much nicer if the Play/Pause and Cue buttons would have been bigger. Now and then it happened to me that I hit the Sync button just when you want to start a track.

Above the blue buttons there are big (rotary) Knobs which you use to set the length of your loop. It applies the Looptimes of Traktor, 1/32 till 32 bars.
Above the Loop buttons there two (rotary) knobs as well. These are used to browse through play lists and loading tracks. Beneath these knobs you have got the FX buttons, two per player. This works very well I think. By pressing the Shift button you can use the secondary (FX) function of each button. Every button has a secondary function. 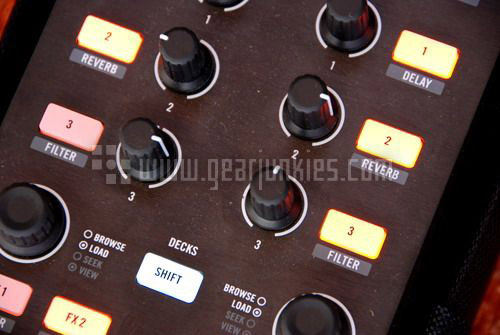 The FX section shows us the effects used. With the software supplied (Traktor LE) with X1 you sadly can’t use the second and third effect. Which is a shame. Last knob in the FX section is the filter.

PRO’s:
– Technically this top notch. Like I said before … a monster in a little box
– Brwosing through your playlist an tracks works perfect
– The Loopbuttons perform very good
– Nice and compact
– The looks are pretty, especially with the LEDs

CONS:
– The X1 is rather thin.
– There are no USB inputs! With Traktor Pro (4 decks) you will need two controllers and one audio interface. If you are using a Macbook for example you need a HUB to make it all work. I can see this will give you problems.
– Buttons could have been a bit more robust (bigger).

Final word:
If you can afford one, and you’re in the market for a Traktor controller, … BUY one. This thing ROCKS!

We like to thank Native Instruments. Review was written by Maxim van der Veen.