Voxengo is pleased to announce the release of HarmoniEQ version 2.0, a parametric, harmonically-enhanced equalizer plug-in for professional music production applications, available in AudioUnit and VST plugin formats, for Mac OS X (v.10.4.11 and later) and Windows (32-bit and 64-bit) computers. 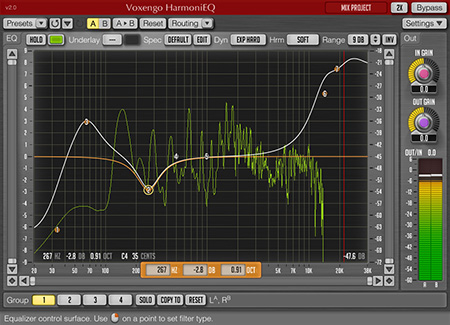 Harmonic enhancement HarmoniEQ applies to the sound is an inherent element of its overall sonic quality. HarmoniEQ also features dynamic equalization modes that offer you a vast palette of sound-shaping capabilities, suitable for mastering.

Since the easiness of tuning was one of our goals when producing this plug-in, HarmoniEQ features a single control surface to control the equalizer curve. HarmoniEQ’s control surface workflow implements our
best findings in the area of “user-equalizer” interaction. Just drag the filter control points to the right places. You can enable up to 7 filter bands, with the filter type freely-selectable from peaking, low-shelf, high-shelf, low-pass, high-pass and notch filter types.

Another useful element of HarmoniEQ is its control surface’s frequency range which goes up to 38 kHz. Such extended range allows you to make smooth “air” boosts easily. While HarmoniEQ is best suited for EQ boosts, its EQ cuts also sound great.