Waves Audio announces the new OneKnob series, a set of seven plugins, each of which provides a particular effect controlled by a single knob. Great sounding and easy to use, OneKnob plugins feature the best of Waves’ award-winning audio processes, coupled with their simplest, most intuitive interfaces ever. For everyone from home recording enthusiasts to audio industry professionals, OneKnob plugins deliver high-quality, quick results, providing outstanding go-to solutions for studio and live sound work alike. 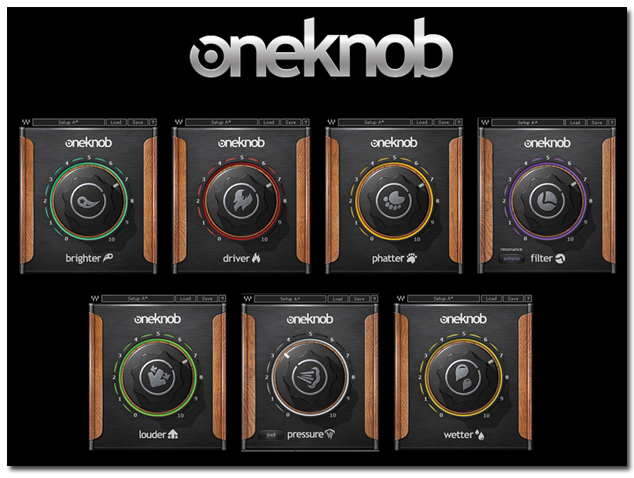 In the control room, in the DJ booth, or when mixing a live show — when users don’t feel like tweaking loads of parameters, and when they want to stay focused on the music and simply dial up some great-sounding effects — OneKnob plugins may be just what they’ve been looking for. Hooked up to a hardware controller, mixing has never been this fast — or this much fun.
The OneKnob Series includes OneKnob Brighter, OneKnob Phatter, OneKnob Filter, OneKnob Pressure, OneKnob Louder, OneKnob Driver and OneKnob Wetter.
OneKnob Brighter
An intelligent treble booster that adds brightness from the mid-high range on up, Brighter is perfect for brightening up a track or making it cut through the mix.
OneKnob Phatter
Phatter is a bass booster that provides a quick way to add bottom, weight and body to bass, keys, kick drums and vocals alike, to thicken them in the mix.
OneKnob Filter
From the mixing room to the DJ booth, Filter is a powerful sweepable filter with switchable Resonance modes, perfect for full mixes, loops, analog synths and more.
OneKnob Pressure
From light, parallel-style compression to pumping and squashing, Pressure is a versatile dynamics processor, ideal for percussive sources like loops and drum busses.
OneKnob Louder
Using a combination of peak limiting and low-level compression with automatic makeup, Louder effectively makes tracks louder, increasing RMS by up to 24 dB.
OneKnob Driver
Inspired by famous guitar overdrive pedals, Driver is capable of everything from light overdrive to full-on distortion. But it’s not just for guitars; it sounds great as an effect for vocals, piano, synths, drums, bass and more.
OneKnob Wetter
From short, bright ambiences that are felt more than heard, to longer, darker spaces, Wetter adds instant depth to any track, creating the perfect atmosphere.
The new OneKnob series of plugins from Waves is Native only. U.S. MSRP for the OneKnob Series bundle is $400.00; U.S. MSRP for single plugins is $80.00 each. OneKnob Series SoundGrid includes six plugins (Louder, Pressure, Phatter, Brighter, Driver, Filter) and is available for $600.00 U.S. MSRP.
For more information, please visit www.waves.com.
Tagged: software
Share this post:
Tweet