Numark is famous, in the turntablist/scratch scene, for its CD players but also mixers. For Gearjunkies I had the pleasure to take ‘a closer look’ at the Numark NDX800, media player and midi controller. The NDX800 is a versatile media player as you can use oldskool CDs but also other formats via USB. It can even be used as a MIDI controller for Traktor LE, which comes with the NDX. 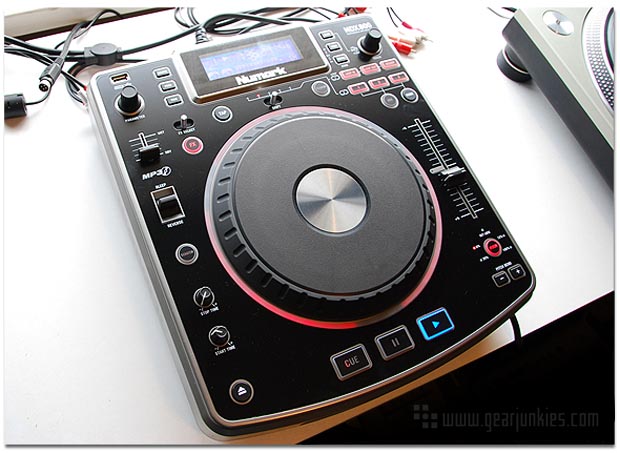 First Impression
As soon as I had the NDX800 in front of me, my first thought was: “Man this thing is HUGE!” I estimate it’s almost like a CDJ-1000, so big. Something I didn’t expect referring to a picture of the NDX. I also was a bit overwhelmed by the amount of knobs and buttons on the NDX, of which I didn’t know what they were for. But then again that’s what a review is for. Let’s see what this baby can do!

Connection
At the rear of the player we have the ‘usual suspects‘, the connections. A eurocable for powersupply, faderstart, relay, digital and analogue audio outs and a MIDI out.

USB
At the top of the NDX there is a second USB port where you can use a USB stick. Loading a track is pretty simple. Put the stick in the USB port and press the ‘source’ button till USB appears in the display. You have to confirm by pressing the parameter wheel. Now it will scan your USb stick for partitions, directories and MP3s. The NDX will load the very first track it finds. Of course you can browse further (back and forth) for music you want. The usability/method of browsing was, in my opinion, pretty logical and easy to master. The only little flaw was the (smallish) size of the display which made it a bit unclear at first, to master the browsing technique. But again, after the inital time I ‘got it’ pretty fast.

Loops
At first it seems the NDX has been fitted with just 1 loop and 3 hot cue’s, but that’s not true. The player has much more then that. With the MODE button you can alter the function of the lower three buttons on the NDX800. You can then choose another function like Sampler, Loop 2 and Hot Cue. 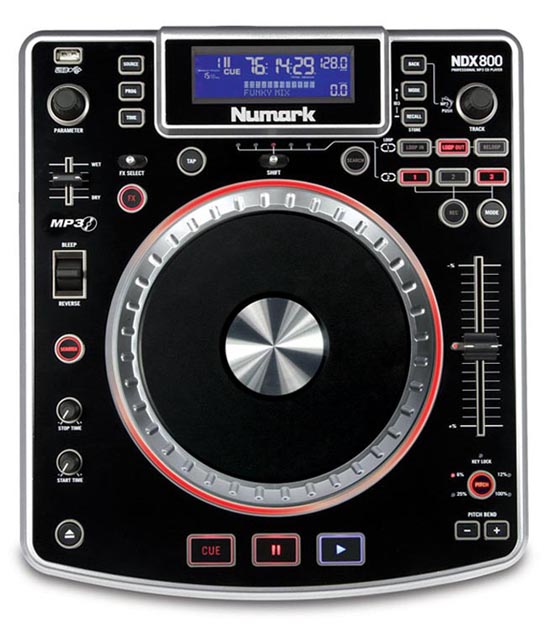 Sampler
The sampler does need some more attention here, as it is a bit difficult to operate at first. As soon as we are in sample mode, all three the lights turn off. To record a sample under one of these three ‘lights’ we have to set the NDX in record mode. Now you can start recording with pressing the record button. You have 5 seconds of recording time, after recording you push the button again and you have recorded and saved your sample. The working/method is quite easy, the tricky part is the timing however. You’ll need quite a few practise runs before you have that mastered.

Effects
One could say they don’t belong on a CD player, but on the other hand… yes they do, especially beat effects. A CD player can ‘look forward’ and detect when a beat will change, a DJ mixer can’t! This is probably the reason why the NDX has built-in effects. The player has the following effects: chop (cutter), echo, filter, flanger, and pan. After setting the wanted effect with the parameter button you can activate the effect with the dry/wet fader, which could have been a few centimeters longer in my (personal) opinion.

Reverse and Bleep
Left of the jogwheel there is a button called ‘reverse‘ which, obviously, lets you play the track in reverse. This button works exactly like the CDJ-1000 button, however there’s an extra feature/function. If you push this button up, you will activate the ‘bleep‘. The bleep lets you play the track in reverse, however the track will also continue to play in the background. If you let the button go, the track will continue in the spot where you started, at the beginning! This way you can use short reverse effects while mixing. Neat!

Conclusion
Like I said before, the NDX reminded me a bit of the CDJ series, however the NDX can carry its own weight very well. It even delivers more with its effects, USB connectivity, MIDI control and Sampler. Allthough the NDX isn’t ‘the standard’ and doesn’t look as such, this player is a full on DJ CD player for its price of 360 Euro. If some Pioneers are a bit out of your league, this NDX800 won’t disappoint you. I don’t see any reason not to go for a pair of these for your set. Try them out at your local distributor and you’ll see!