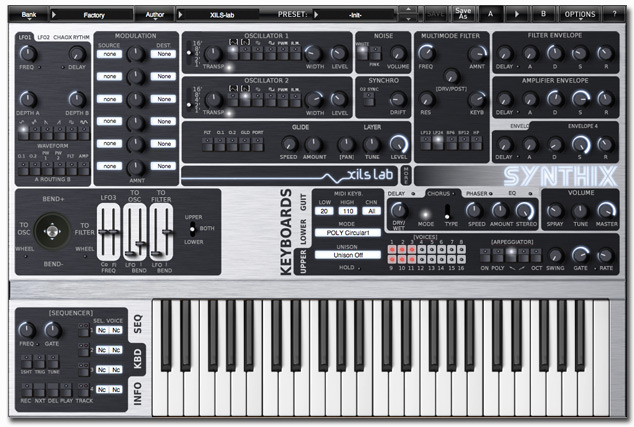 Pity, then, that the Synthex did not sell in such Jarre-like quantities during a four-year, three-stage (50-, 800-, and 1,000-unit) production run, with one last post-production unit being made especially for Steve Wonder, such was the legendary American singer-songwriter/multi-instrumentalist/record producer’s love for the future-classic instrument that effectively failed to fly in the face of the-then ‘art nouveau’ digital age of dominating desirable FM synthesis from Yamaha’s considerably cheaper, MIDI-equipped DX7, and subsequent super-selling, all- singing, all-dancing digital designs from the likes of Roland (D50) and Korg (M1).

That said, with 30 knobs, six sliders, 80 switches, a joystick (replacing traditional pitch and modulation wheels to allow greater variable real-time control over the two LFOs, oscillator, and filter modulation) spread across its spacious front panel, the Synthex had some unique features for its time, including two stable DCOs (Digitally- Controlled Oscillators) per voice; oscillator cross-modulation of pulse width; multimode (Low-Pass 24dB/octave, 1st Band-Pass 6dB/octave, 2nd Band-Pass 12dB/octave, and High-Pass >12dB/octave) filters; separate envelope generators; Chorus effect; and Dual or Layer keyboard modes — little wonder, then, that many came to consider it a worthy adversary to the dominating American analogue programmable polysynths of the day, such as Sequential Circuits’ Prophet 5 and Oberheim’s OBXa. Better sounding, some said, and arguably more reliable to boot, thanks to those trusty DCOs!

What goes around often comes around, and, thanks to today’s technological advances, the XILS-lab team has successfully made this analogue behemoth fit for the 21st Century in the graphically-driven, ear- and eye- catching form of the Synthix!

So how, exactly, did they get from Synthex to Synthix? Says XILS-lab CEO Xavier Oudin: “After developing the PolyKB, I received lots of requests regarding recreating the Elka Synthex and began to look for more information, initially discovering its ‘Laser Harp’ sound, then all the well-known artists who used it, and, of course, its features. It’s a polyphonic synthesizer, but very different to the RSF Polykobol II — each oscillator having its own PWM and ring-modulator module in addition to standard hard sync-able sawtooth, triangle, and pulse waves; furthermore, the filter is a multimode design, offering self-oscillating band-pass and high-pass filtering, as well as standard low-pass. Interestingly, its keyboard can be spilt to play two different sounds at the same time, so I thought, ‘Why only two sounds? Why couldn’t it be multi-layer?’ The answer was obvious: this should become the next XILS-lab product!

“So I began to analyse the schematics, getting original sounds, and looking for people who own the original instrument. With the help of those contacts, I worked on the algorithm to recreate the filter, the hard- synchronised triangle wave, and, of course, the PWM cross-modulation mode, which was what was used to create that famous ‘Laser Harp’ preset. Subsequently, the multi-layer, dual-keyboard architecture was developed to take this soft synth to a very high modern level.”

“But still this wasn’t enough for me; I wanted to add some new, never-heard-before features to the original instrument’s already wide-ranging feature set.”

Thereafter, in the true spirit of teamwork, XILS-lab achieved its goal, blending past and future, “…thanks to all the sound designers; Laurent Bourgeon, who brought the Rhythm LFO feature into the mix, as well as the D-ADSR, and a useful look to the GUI and overall ergonomics — merging hardware and software, Synthex and Synthix, with Paul Wiffen, who created most of the original Synthex factory presets, as well as introducing the Synthex to such glorious musicians as Stevie Wonder, Jean-Michel Jarre, and Keith Emerson, acting as ‘conductor’.”

As a virtual analogue synthesizer, and then some, the Synthix successfully combines now-standard analogue features with several new and exciting ones — truly more than the sum of its parts:
• Two oscillators with four selectable (seven available) waveforms — triangle, PWM triangle, sawtooth, PWM sawtooth, square, and PWM pulse (plus a PWM cross modulation mode and a ring modulator).
• One multimode filter, based on a Curtis CEM3320 24dB/octave (multi) chip emulation — provides low-pass 12dB and 24dB, band-pass 6dB and 12dB, and high-pass 12dB.
• Four D-ADSR — enhanced standard ADSR envelopes, each with a MIDI-sync-able delay.
• Two polyphonic LFOs — each capable of modulating the oscillators’ pitch and width, filter frequency (with host application tempo synchronisation), and amplifier level, or as a modulation matrix source.
• Four embedded effects — delay, chorus, phaser, and dual EQ.
• Polyphonic sequencer — up to four tracks (with legato mode).
• Chaox — an LFO module that calculates the movement of a point in a 2D space (with each axis capable of modulating any of 132 destinations).
• Rhythm — an LFO module dedicated to rhythmic effects (with five modulations assignable to any of 132 destinations).
• Split keyboard — each with an individual arpeggiator and MIDI management settings, and capable of managing up to 16 freely-chosen voices to make full use of the multi-layering capabilities (with eight totally independent layers).
• Guitar mode — two voices can be assigned to up to six MIDI channels to play various sounds with each guitar string (when using a MIDI-to-guitar converter).
A wide range of sounds — from straightforward recreations of vintage or modern analogue synths to more complex patches — can be created using Simple Mode Edit or easy-to-operate Split and Layer modes; Synthix is bundled with 250-plus presets produced by a talented team of notable sound designers (including Kelvin Ford, Thomas Hook, Kire, Lotuzia, Peter Schelfhout, Soundsdivine, Tzadi, and Vivolator).

XILS-lab Synthix is available from July 21 for €169 EURO (including VAT for EU countries) from the XILS-lab Store.