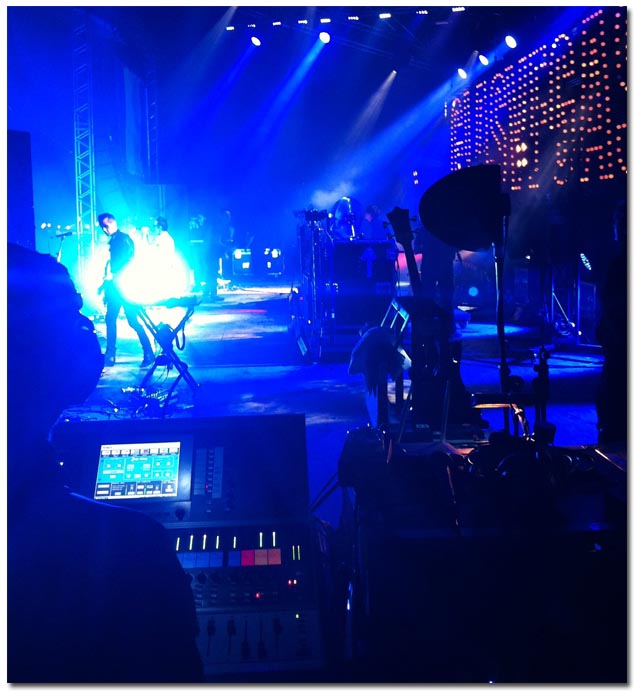 On the John Peel stage, APR chose an iDR-64 MixRack connected to the largest control surface in the range, the iLive-176, for monitors. 12 onstage mixes were provided, plus LR side-fills and up to 8 stereo IEM feeds. Engineer, Fabrizio Piazzini, additionally used the iLive MixPad app to make final tweaks. For FOH, an iLive-144 Control Surface was chosen, connected via CAT5 ACE to a modular iDR10 MixRack installed onstage.

The systems were networked to provide input sharing and remote control via the iLive Editor PC software.

“One of iLive’s great assets is that it is a networkable system, the benefits of which really come into their own in the fast paced festival environment.  For instance, engineers can check FOH settings from the stage without battling through the crowds and mud,” explains Allen & Heath product manager, Leon Phillips, who joined the APR team on site. “Using iLive Editor software, we could drag appropriate channels from the generic patch directly onto the iLive surface layers in real time even while the engineer had already started working on the desk!”

A broadcast feed was also provided, split from the iDR-64 mic preamps and patched via the ACE network to 48 XLR outs on the iDR10 MixRack.

“Working with a generic festival layout is tricky, as you can end up with active channels spaced out all over the board and in different layers but this was not the case with iLive,” explains house FOH engineer, Stuart McKay. “The surface worked really well when it came to quickly putting bands’ channels next to each other, and hiding channels/outputs that I did not want visiting engineers to touch. Engineers who had never used iLive before soon got their heads around it and found the layout simple and intuitive.  The way that ACE was implemented to feed the broadcast sends was really cool and the gain sharing that was in place between monitors and FOH worked really well.”

On The West Holts Stage, APR provided an iLive-144 surface at FOH, and an iDR-64 was built into the stage box input rack. A compact iLive system, comprising an iDR-16 MixRack and  iLive-R72 rackmount Control Surface, was used to manage compere mics, DJ, and BGM duties at FOH. Delayed near-field monitoring was also controlled by this set up at the FOH tower.