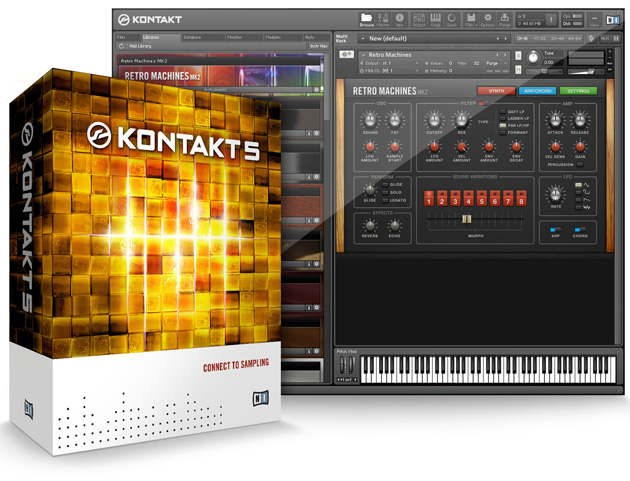 In a further major expansion of its unrivaled sound shaping capabilities, KONTAKT 5 introduces a completely new suite of high-quality filters, developed by the creative mastermind behind the acclaimed MASSIVE synthesizer. Ranging from classic analog-style ladder and state-variable models to modern formant filters,

The comprehensive effect assortment in KONTAKT has been extended with several key additions that focus on studio-style sound processing. The new “Solid G-EQ” and “Solid Bus Comp” algorithms – derived from the upcoming SOLID MIX SERIES – enable studio-grade equalization and compression, while the separately available TRANSIENT DESIGNER has been integrated into the effect arsenal of KONTAKT in its original form. Additionally, a new analog-modeled Tape Saturator can add natural compression and subtle organic overdrive, while the acclaimed vintage sampling modes from Native Instruments’ groove-production system MASCHINE have been integrated into the feature set of KONTAKT 5 as well to provide additional flavors of charismatic “vintage dirt”.