Mixed In Key  is pleased to announce the release of Mixed In Key 5, the latest version of its harmonic-mixing software that’s used by world-class DJs like David Guetta, Pete Tong, and Kaskade. Mixed In Key 5 quickly and accurately identifies the keys and tempos of digital music files, making it easy for DJs to create mashups and play perfect DJ sets. Version 5 offers new features and functions, as well as a powerful new key-detection algorithm. 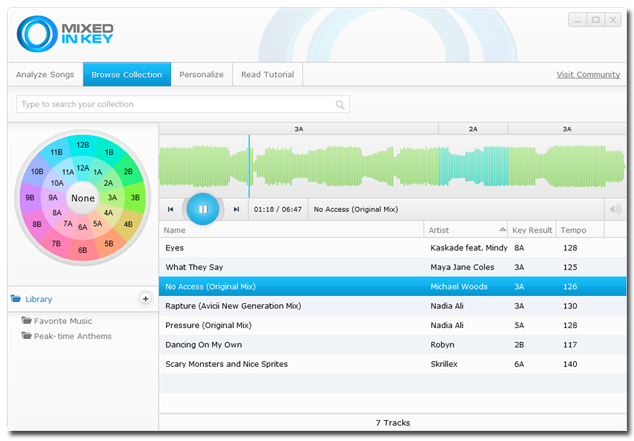 “Mixed In Key 5 is the professional DJ’s choice for harmonic mixing,” says Yakov Vorobyev, President of Mixed In Key. “It’s a powerful DJ tool that connects with your favorite DJ software and DJ hardware, and makes it possible to mix harmonically regardless of your medium.”

Mixed In Key 5 offers multi-processor support for both Mac and Windows machines, allowing the software to take full advantage of the blazing speeds possible on multicore CPUs. Another highlight is the new Audio Player, which lets users audition the key-detected songs and samples from within the software. In addition to existing support for MP3 and WAV file formats, Mixed In Key 5 adds M4A and MP4 (video file) support.

The new key-detection algorithm provides enhanced levels of accuracy and sophistication, and can detect key changes within songs. Key changes are clearly shown in the waveform display of the Audio Player, allowing users to see, at a glance, where in the song the change occurs. Whereas the key detection in previous versions looked at a song-file as a single entity, the new algorithm analyzes it as a series of beat-aligned segments. This ability to analyze short audio files means that remixers and producers can use Mixed In Key when working with sample and loop libraries, making it easier to find files in the same key.

As with previous versions, Mixed In Key 5 uses the “Camelot Wheel” system, which displays key names on a circular chart that is numbered and color-coded. This approach makes harmonic mixing easier by graphically showing which songs are compatible with each other. In version 5, a clickable Camelot Wheel offers an elegant new way to see key-detected material. Once the software has analyzed a collection of songs (for example, an iTunes library), clicking on a key name on the Camelot Wheel instantly brings up a list of all the files in that key, making song selection a snap.

With its powerful new feature set, Mixed In Key 5 is more essential than ever when used alongside your main DJ software. “We love when people use Mixed In Key with Traktor, CD-Js, Serato Scratch Live, and all other DJ and sequencer apps,” says Vorobyev. “It works perfectly with them, and takes your DJ sets to the next level.”
Mixed In Key 5 for Windows and Mac OS X is available from www.mixedinkey.com for $58. The upgrade from previous versions costs $29.99.