There it is, the Vestax VCI-400 DJ controller, a four deck controller which has been eagerly awaited since the past BPM Show in the UK. A couple of weeks ago we had the pleasure of getting a pre-production model and went to play with it for a while. Questions before we started reviewing it were, will it be a serious player in the high-end four deck controller market? Will it disappoint and keep the Kontrol S4 as the leader of the four deck controller segment? Read on, because there is a lot the say about the VCI-400! 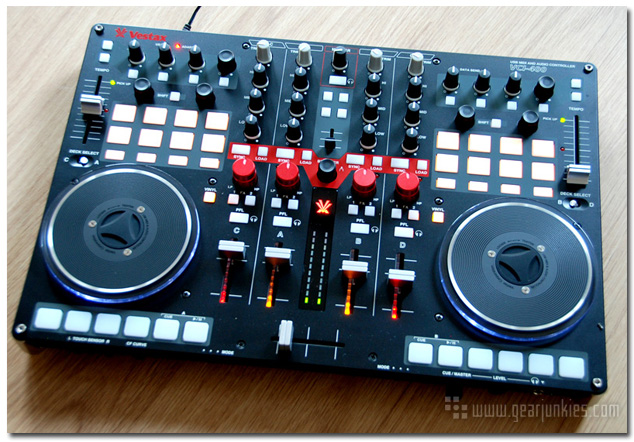 Up till now, in the Digital DJ world, we know (mainly) the VCI-100 and VCI-300 from the Japanese manufacturer. The VCI-100 is one of the earlier, if not the first, controllers who lifted digital dj’ing up to a professional level. The VCI-100 had a rock-solid housing with great faders and buttons, all-in-all a well built machine. The VCI-400 continues this good feeling. It also has a solid and nice feeling when working with it. It just feels really good. However, this does mean that this controller is heavier. It weighs almost a kilogram more then a S4 for example.

Get It Out The Box
One of the first things you notice when unboxing this controller is the huge amount of knobs and buttons. Oh my! This is definitely not your average dj controller. This machine isn’t a beginner controller, but for DJs who know what they are doing and want to get as much out of it as possible. Another observation was that this controller doesn’t have many labels at the buttons and knobs. Which means that users will be able to use it however they like. Vestax will provide overlays for Virtual DJ and Traktor Pro 2, plus ’empty’ overlays to create your own.

When connecting the VCI-400 you will notice it’s a heavyweight on power too, because just a USB cable won’t cut it. You need external power! So don’t forget your external power when DJ’ing on location! 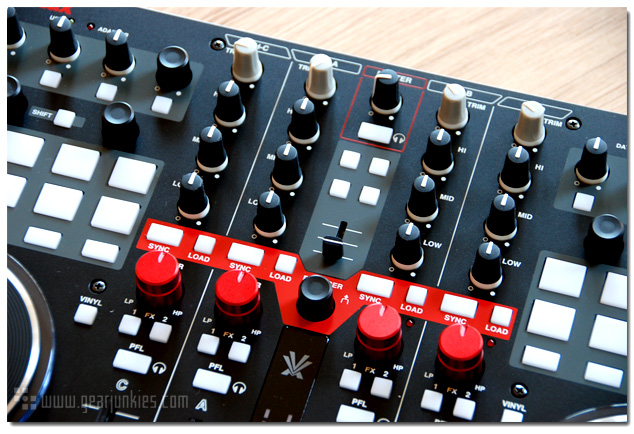 Buttons, buttons, buttons and … knobs!
As I started playing and working with the VCI-400 I knew immediately I would have some long, long nights ahead. It sounds, as expected, very thick and everything just feels so solid and good. The controller has those great big red filter rotaries, and the faders, the jogwheels, the potmeters, … again it all just feels really nice and firm. The resistance (drag) of the faders and rotaries is just right, and it gives you the impression that you have a very solid and good product in your hands.

All good? Well, not everything. I didn’t have that positive feeling with the ‘endless’ rotaries in the loop section and the FX units. They felt kinda ‘plastic’. Something else I didn’t really like was the fact that the transport buttons below the jogwheels and the ‘trigger’ buttons above the jogs were different from eachother. The trigger buttons made a clear and loud ‘click‘, where the transport buttons were more like soft touch. Eventually you’ll get used to it but I prefer similar buttons all over the controller. That said, they do work very well though.

Transport section
At the bottom of the VCI-400 controller there’s one of strong points of this controller. You’ll get six transport buttons, which can be used in different modes. Vestax has chosen for a very clever mapping to map double transport controls at both sides. This way you can cue and start your tracks on all four decks at all times! It makes live so much easier when working with four decks.

I also liked the use of different LED colors on the controller. This way you can quickly see with which deck you are dealing with. Nice!

Trigger/Loop Section
Between the jogwheels and the FX units you will get a whole arsenal of buttons with which you can release your own creativity. With the included mapping you have the availability of four Hotcues en several Loop functions. The smaller buttons below the eight bigger ones are for the deletion of your hotcues. I found this a bit unhandy. If you, accidentaly, touch one of those you lose your hot cue. So caution is needed here when playing with the controller! 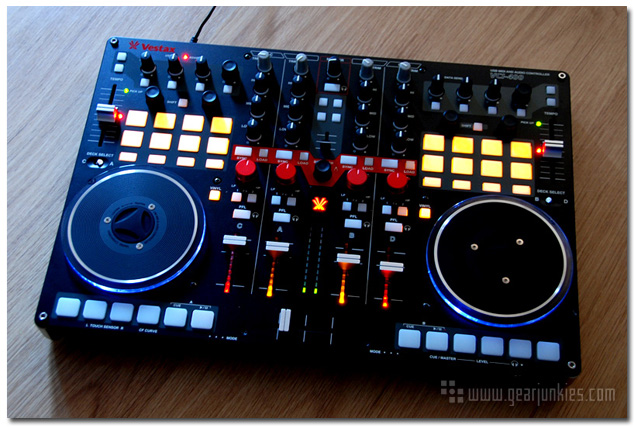 Jog Wheels
Vestax is well known for their pretty characteristic jogwheels on their controllers. And the VCI-400 is no exception as it has the two-part jogwheels with the glass edges/sides. The top is touch sensitive (for scratching) where the sides are used for bending. Beacuse of their big size they give precise control when mixing manually without the sync button, but also the scratching worked good because of that bigger size. With two small rotary buttons on the front you can set your jogwheels as you like. Making them heavier or more loose, just as you prefer!

If you are using the Loop/Trigger section a lot, it would be wise to turn off the scratch function (with a handy ‘vinyl’ button next to the Jogwheel). If you touch the jogwheel by accident your mix would be ruined. Maybe the placement of the jogwheels above the loop/trigger section would have been a better idea? But that said, I must admit these are maybe the best jogwheels I have ever used on a controller. I just would have preferred them on a different location in the lay out.

FX Sections
As with more modern controllers the VCI-400 has two effect sections. Vestax made the choice of creating one endless rotary button next to three regular buttons. This shows us that the controller is not made for one particular DJ software. Next to the ‘endless’ there are two handy buttons for browsing and selecting your FX types (chained or advanced).

Mixer Section
Most noticeable on the mixer section are the big red filter buttons. A very good choice, I must say, as they have become very popular in the DJ world (since Pioneer put them on their DJM800). Very useful are the colored LEDs which indicate if a filter is in use or not. This extra feedback on a controller is always very nice, as it can speed up your workflow just that little bit plus it can prevent you for making a mistake, which happens fast!

I like the mixer layout where you can use lots functions per deck: track loading, FX selection, PFL routing (prelistening). There are loads of buttons, but once you are used to all of them it all works really nice. Especially the load buttons per deck are bliss as you don’t have to switch decks when loading tracks (fast). All-in-all the mixer section has loads of opportunities to make your life much easier, or at least make it all work as you would prefer it to work! 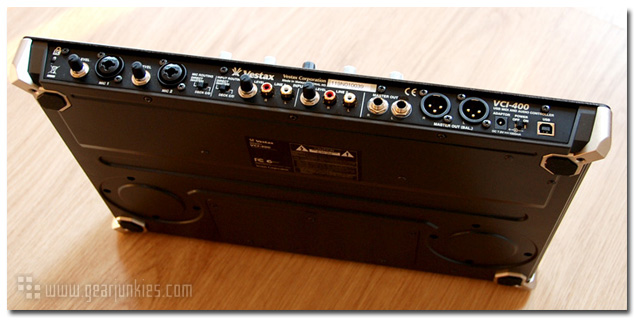 Inputs
And finally, the inputs on the rear of the VCI-400. There are two MIC Inputs (combined Jack/XLR with sperate volume setting) and two Line Inputs. I think it’s a shame that Vestax didn’t choose for a Phono option. This means NO turntable connectivity, unless you use phono pre-amps or use turntables with Line Out! Missed opportunity?

Verdict
Well it has become a long review, with lots of positive points but also some issues I wasn’t completely happy with (personally). As these issues are personal you’ll have to decide if they account for you too. However it is very clear that this an awesome, very solid and versatile DJ controller worth every penny of its price. I am sure the Vestax VCI-400 will be a strong player to be reckoned with on the four deck market!