The various versions of TC’s Radar Loudness Meter originate from the same basic algorithm, and is designed for the exact same purpose – delivering the ultimate loudness overview of any audible source. To ensure seamless transition between platforms, TC now introduces its xApp technology that allows these versions to be 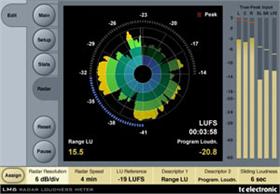 100% consistent with regard to core features across all available versions.

In other words, the Radar Loudness Meter will display exactly the same descriptor numbers for e.g. Loudness Range and Program Loudness when identical program material is being measured by either one of the LM6 plug-in formats or the versions that run on TC hardware.

Finally, version updates – for example in connection with updates of significant international broadcast standards such as ITU BS.1770-2, ATSC A/85 and EBU R128 – will be streamlined across all radar Loudness Meter compatible platforms. Quite simply, users of TC’s Radar Loudness Meter will always be among the first to comply with the newest versions of these important broadcast standards no matter which platform they have decided to use.