After many months of creative sound design and intensive script programming Wave Alchemy are extremely proud to announce the release of the Pro II analogue hybrid synthesizer for Kontakt 4. Inspired by one of the most popular synth’s of its time, Pro II combines classic sounds with modern sound shaping tools to achieve a versatile and fully programmable virtual synthesizer. 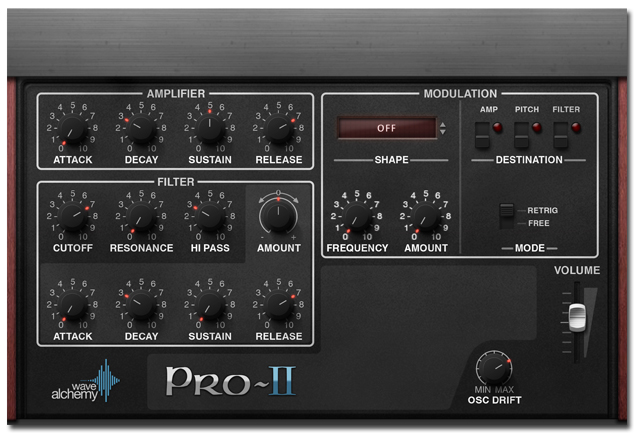 Pro II ships with a 3.9GB core sound library and includes 195 expertly programmed presets, all of which are editable via our extensively scripted instrument panel and stunning GUI controls.

The instrument itself features 5 edit pages;

The preset page is able to load 138 extensively multi-sampled patches designed and recorded from a vintage Sequential Circuits Pro One synthesizer. Sounds from this page can be further edited and mixed with the Pro II’s ‘raw oscillators’ (see below) to create interesting ‘hybrid’ patches.

Synthesize your own sounds using the Pro II’s oscillators… Raw mode boasts 2 analogue oscillators, 2 sub oscillators and 2 noise sources, all of which are individually powered by an extensive set of carefully looped waveforms recorded from a Pro One analogue synthesizer. Every key in a five octave range has been sampled for each waveform and each oscillator.

Saw, Sine, Square and Triangle waveforms are available for both oscillator’s 1 and 2 which can be mixed together with two additional multi-sampled analogue sub oscillators (both selectable between Sine and Square waveforms) as well as a white and pink noise source.

The Pro II sequencer page (see below) gives you access to a comprehensive, analogue style 16 step sequencer which can either be synced to your host sequencer or used independently of host tempo. Each step can have different settings for both filter cutoff and resonance which when combined with the instruments “shuffle” (randomize) function can produce everything from subtle sample and hold type effects to completely insane and wild analogue sequences.

What’s included in the instrument?

For non Kontakt users a slightly scaled down version of the Pro II is available as a Reason 4 Refill. Ableton users can expect a Live Pack version early December 2011.