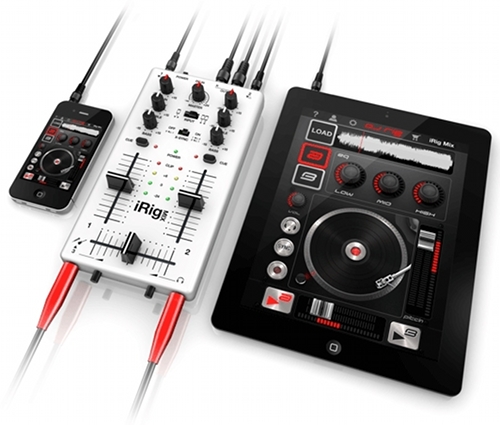 iRig MIX offers the same controls you would expect from a professional DJ mixer (crossfader, cues, EQ and volume controls, etc.) in an ultra-compact mobile mixer that can be used with a huge variety of iOS DJ mixing and other apps. A DJ Mixer: iRig Mix allows DJs to use a traditional setup with two devices (one plugged into each of the independent channels) OR a single iOS device.

For the single iOS device setup, the output of the single device is split into dual-mono and sent to the individual channels. Additionally – for the first time on any DJ mixer – it can be used for mixing any type of audio source (mp3 players, CD players, etc.) with an iOS device using automatic tempo matching and beat-syncing. This is accomplished with X-Sync, a feature that works in combination with the DJ Rig free app from IK Multimedia that is included with iRig Mix.

Not just for DJs: iRig MIX also provides the perfect mixing solution for solo musicians or small ensembles that use one or more iOS devices to play live. It features an extra guitar/microphone input that facilitates processing with popular apps like AmpliTube and VocaLive or any other app that offers real-time audio processing. Its standard RCA connectors provide easy, direct connection to PA systems or powered speakers.

Maximum Portability: The ultra-compact size and low profile of the iRig Mix allows it to easily be carried in a regular iPad bag. Plus its low-voltage power requirements (only 5VDC) allow it to be powered not only by any regular mobile device charger but also by suitable iOS battery pack and laptop USB port for maximum mobility to mix anywhere. iRig MIX includes 4 free apps (downloads from the iTunes app store): DJ Rig, the new professional DJ mixing app from IK, AmpliTube, the most popular iOS guitar amp and effects app, VocaLive the processing app for singers and vocalists, and GrooveMaker, the loop-based beat and groove making app.

DJ Rig stands out from the crowd of DJ apps with its complete set of professional features including some that are not found in any other app such as X-Sync. This mode allows anybody to automatically synchronize the app audio with any other external audio source. DJ Rig “listens” to the device audio input, determines its BPM tempo and syncs the app audio automatically.