Borne of a synth fanaticism of epic proportions and forged in the darkest depths of a legend’s mind, BLADE rises to rid the planet of mundane music… 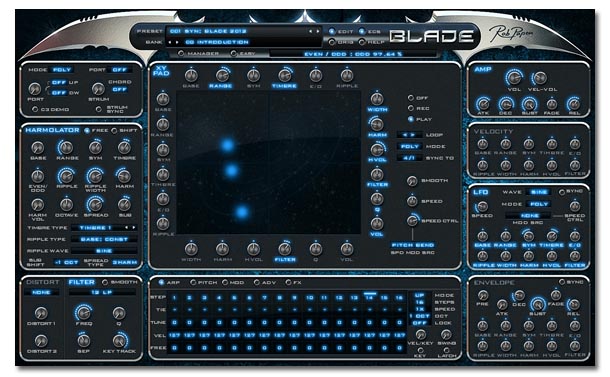 At the heart of BLADE, ready to twist and transform your musical mind, lies the Harmolator. An additive synthesis system, which rather than using the system of changing additive partials, uses global controls which capture the essence of additive synth in an intuitive way making the creation of sounds much easier than using other additive synths.

The nine Harmolator controls allow you to create a vast range of sounds so you get all the amazing sounds that additive synthesis can generate with the added simplicity of traditional subtractive synthesis.
The Harmolator allows oscillator spreading, fattening the sound and also square / sine wave sub-oscillator. What’s more, the sound can be modified further by the 21 per-voice distortions types and 14 filter types.
Blade offers total control of the sound over time using an array of different modulation controls.

The most significant of these is the central XY screen. Here you can either alter things directly by moving the cursor around, or you can record paths which can be replayed. The recorded path can be looped, bi-directional looped and tempo based as well. Even the speed of the XY recording can be modulated for dynamic changes! So the XY pad is also an incredibly advanced “human input” modulation source.

Two FX units featuring all the FX from other Rob Papen products, plus the Arp / Sequencer and an Easy page which allows you to easily control sounds, all add up to an amazingly flexible and useful instrument at the cutting edge of today’s synthesizers!