The new version 1.3 of AmpKit, the award-winning iOS guitar and bass amp modeling application from Agile Partners, makes Trace Elliot the first modern bass amplification system to be modeled for the iOS platform, and the most feature-rich amplifier ever modeled in AmpKit. 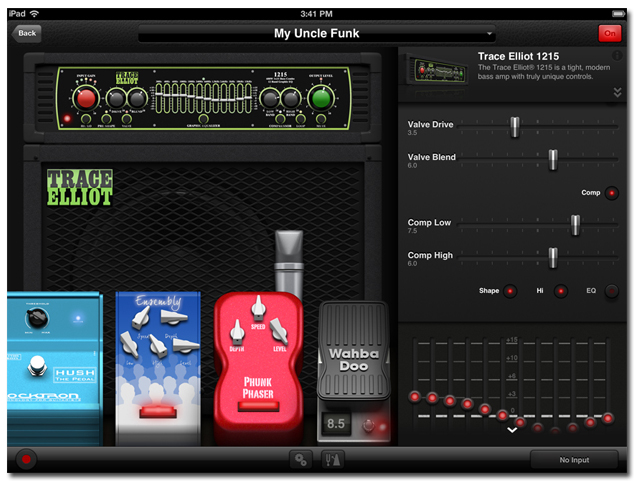 For the first time, bass players who use the iOS platform to practice, perform and record can use a fully featured, modern, world-class bass amplifier and cabinet, modeled after the Trace Elliot 1215™ combo. Players get all the sophistication they have come to love about the real Trace Elliot amps, including the switchable valve (tube) drive circuit for fat bass distortion and the signature Pre Shape circuit that delivers the classic Trace Elliot tone. Trace Elliot is regarded as the first true specialty bass amplification system.

AmpKit’s Trace Elliot model also includes the famous Trace Elliot 12-band Graphic Equalizer, tuned for bass frequencies, plus the optimized dual-band compressor and a convolution-based simulation of the 1×15 cabinet featuring a specially designed loudspeaker and high-frequency horn—all with the high-quality tone fidelity musicians have come to expect in AmpKit.

AmpKit+ Version 1.3 is available now for a limited time for only $9.99 on the iTunes Store. The Trace Elliot 1215 amp model can also be purchased separately for $3.99. The original AmpKit app is a free download.

Find out more at ampkitapp.com