Izotope Ozone 5 Advanced mastering software is on the market for a few months, so we draged this new version into our Gearjunkies TechLab for a closer look. 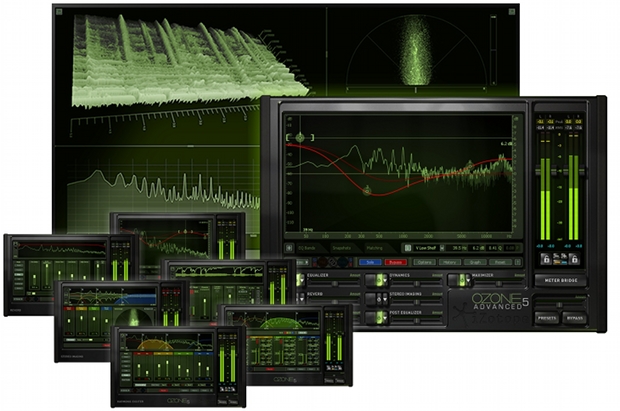 I have been using iZotopes Ozone since version 3. At that time you got a cool shiny full-color box with a CD-rom and a quick start guide, like most software then. Ozone 4 was the logical successor. This version looked nicer and had just a few more options like mid/side techniques and it was available as an upgrade with a reduced price of course.

Now we have already version 5 with yet even more options and features, an even better interface and with a better sound quality. Ozone 5 is available in two version the regular one and the advanced version. On the iZotope website they state: “Your mix isn’t finished until Ozone is on it!” Well let’s see if there’s truth in that statement!

As a mastering engineer I used Ozone 4 for stereo imaging, not only to broaden or give the sound more stereo, but even more to give the low end more mono! For each frequency band you can indicate what needs to happen to the stereo image. You can go either way, more stereo or more mono. This last technique I use to get the low end more centered. The EQ I occasionally used to make some minor corrections and the limiter to cut off some small peaks. The mulitband compressor I used rarely and the mastering reverb, well I am still wondering what’s the use of that feature. The harmonic exiter is fun, however in the high and mid the sound is pretty harsh and, in my opinion, in the end not usable.

By now you might be wondering, what’s so different in Ozone 5 besides the fact it is now available as a VST3 plugin? First off the size of the GUI. On one hand very handy as you have a much better overview, but on the other hand, it is BIG! With my 1600×900 resolution display, half of that is filled with Ozone!

Like in previous versions Ozone is divided in different sections which you can turn on and off. I will discuss and explain more on what these sections do and what the differences are compared to the previous version(s).

The EQ has become a lot better and sounds a bit better as well. Something I noticed right away was the fact that the low end, by using the digital EQ, a nice full and punchy sound got and very usable as well.

Another handy feature is the overview of all your settings per band. The analyzer, visible on the background, can be very useful when looking for a resonance peak for example. Other then that it is a lot of eyecandy because you hear music with your ears, not your eyes. At the high end the EQ sounds equally good. In fact there’s nothing wrong with this EQ!

Below the EQ we’ll get the reverb. In my opinion you don’t need a reverb for mastering! I think this feature won’t be used or maybe very rarely, in mastering. Maybe for some mixing purposes, however this plugin is a bit too heavy for that. Something I do like is the fact that you can use the reverb in mid/side mode. Which means you van use the reverb on only your side channel for example.

As I mentioned before I find the exciter in version 4 a bit too harsh and not very useful. However, in version 5 it has become a lot more subtle and much more useable. Especially in tube mode it sounds very nice and can become a nice tool for giving your high end a ‘sparkle’ or to pull your mid a bit more to the front if you can’t achieve that with the EQ. This ‘feature’ is nice, very nice from the guys at iZotope! Normally an exciter is a ‘no go’ in mastering but this one can become very handy maybe…

I often use stereo imaging as a tool to give my low end some more mono. In fact does the stereo imager nothing more then change the balance between your mid and side channel. Only with Ozone 5 you can indicate per frequency band what needs to happen. The cross over frequency is easy to adjust to tell it what needs to happen. When working with this feature I happen to discover a bug. The guys at iZotope picked it up immediately and would get it fixed with the next update. Great work and service by iZotope!

Something I noticed with version 5 is the disappearance of the delay per band. That’s a good thing, because in my opinion it created instant phase problems, and with the delays gone that doesn’t happen anymore!

Hey? Didn’t I discuss the EQ already? … Yes I did! But there’s one more in here too, which is an exact copy of the mentioned above. But why another EQ then? Well sometimes you’ll want another EQ after your compressor, and this way … you can have that!

By the way, if you click on the ‘graph’ button you are able to re-arrange the order of your plugins by simple ‘drag and drop’. Very easy and useful. Love it!

Last in the mastering chain we often get the limiter, the ‘maximizer’. You can choose between 5 different ‘types’ of limiting with each their own character. The limiter, mainly the IRCIII, is being called the best one out there at the moment, allthough the opinions on that statement differ! The limiter becomes quickly a bit ‘pumpy’ or sounds flat compared to my personal favorite, the Pro-L.

However, without any doubt, the limiter sounds a lot better then the one in version 4! With version 5 the sound isn’t as grainy and crunchy when you push it. Version 5 also sorted out the intersample peaks option and the coloring of the sound. Next to the limiter you have your dithering options of course. My personal favorit option is without doubt the ‘mbit+’!

Only a few days after the release of version 5, iZotope released version 5.01 with an extra option to turn on/off the steroelink, and to set the percentage. Really nice, only intended for the ‘Advanced’ version now available too with the ‘standard’ version!

In version 3 you had these ‘blocks’ with low resolution, in version 4 they improved this considerably, and with version 5 this is just outstanding! Next to the standard peak/rms you can choose from several metering standards like the K-System standard and LUFS. I hope they will include the EBU R128 standard as well in a future update.

Personally I think the faders are a bit too dark, without saying they are badly visible, they are just a bit dark and I would have preferred that differently. Useful are the phaseflip buttons below the faders. With version 5 Advanced you’ll get a lot of extra metering options with the added option to use them as a seperate plugin. Very useful but worth the extra price?

Ozone 5 is a very good plugin software, with loads of options and a big step forward against version 4. In fact all sections of the software are very useful and you’ll get the tools to do a great master with just the Ozone software! Just be carefull with the presets. In my opinion you can’t do a good master with presets anyway. Often all you need is an EQ, a very subtle compressor, and a limiter, and sometimes even less, to do a good master.

One of the dangerous aspects of the Ozone software is the vast amount of options. You tend to use them all! … Don’t! The software needs a sticker: “Use with care!”

Ozone 5 costs $249 and the Advaced version costs $999. Its availible at your local store or in de Izotobe webshop. More info on www.izotope.com