Pianoteq STAGE, formerly known as Pianoteq PLAY, is based on the same recently refined acoustic model as in version 4 of Pianoteq Standard and PRO. It includes the same instruments, sound and playability. The interface is scaled down, tailored to focus entirely on playing. 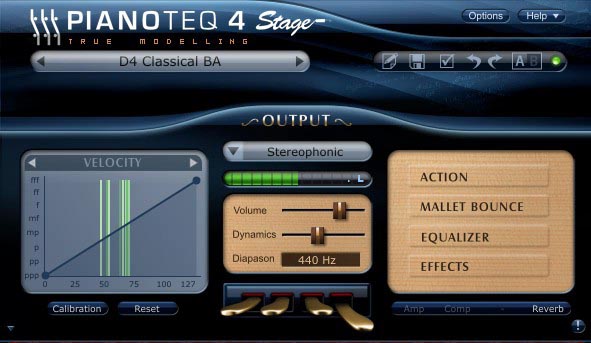 Focusing on playing – Formerly known as Pianoteq PLAY, Pianoteq STAGE is the new version for budget-minded musicians who prefer to focus entirely on playing rather than sound adaptation or specialized studio recording.

New sound – Pianoteq STAGE offers the same refined physical model as in version 4 of the Standard and PRO version, including the new grand piano D4 where a Steinway D from Hamburg has served as reference. Designed with extreme care, each note is adjusted and voiced up to perfection, resulting in a stunningly vivid instrument.