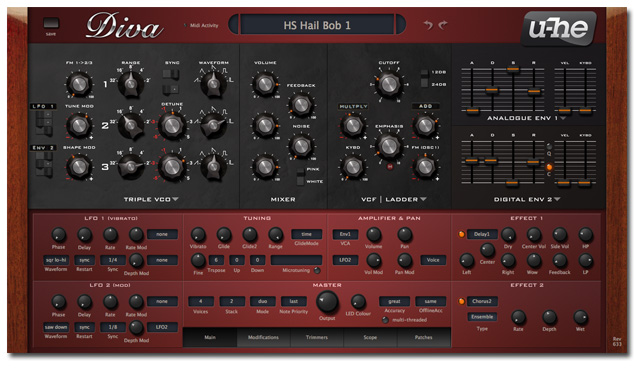 Firstly, Diva’s CPU-hit has been reduced by up to 40% e.g. when filter resonance is relatively high. Urs Heckmann enthuses: “We discovered a really neat way of optimizing the prediction algorithm in our zero-delay feedback filters without compromising Diva’s analogue quality in the slightest!”

Secondly, owners of multi-core systems running Diva will be pleased to hear about the new multi-threaded option, which distributes voices between the available cores. Arriving out of the blue in December 2011, Diva was quickly hailed as the plug-in to beat for analogue authenticity. Despite all the accolades, even the audio engine has been polished in this version – the oscillators shine a little brighter now, and transients sound even more natural than they already did.

Upshot: Several improvements in version 1.1 make the original bold concept – meaty goodness at whatever cost to the CPU – even more palatable.