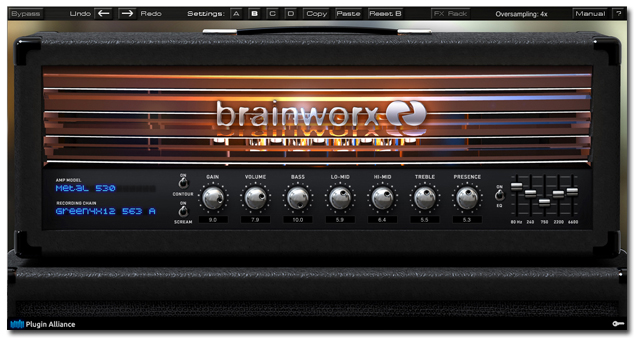 A renowned rock guitarist in his own right, Brainworx CEO Dirk Ulrich is also a sought-after producer who has worked with James LaBrie (Dream Theater), Pro Pain, members of Toto, Jennifer Batten (Michael Jackson), TM Stevens (Joe Cocker), and many more standout musicians, so he should know a thing or two about getting great guitar sounds! Indeed, he has always been known for the great guitar sounds produced in his company namesake Brainworx recording studio (formerly Brainrox Studios) in Germany, so what better place to dream up and create the ultimate guitar amp plug-in? “We have recorded a lot of rock and heavy metal bands in the past ten years in this studio, and I have developed a quite unique chain for guitar recordings, containing a vintage Neumann CMV 563 microphone, a Telefunken V76 tube pre-amp, and a fantastic Neve VXS console, which we use for EQ and summing,” details Dirk.

Continues the conceptual creator of bx_rockrack: “Brainworx is famous for its world-class emulations of the most expensive high-end audio equipment for companies like SPL, elysia, Vertigo, and Mäag Audio, but, while a lot of analogue equipment has already been very precisely modelled, the Brainworx team felt it was time for a guitar amp plug-in that finally sounds and feels like the ‘real thing’ — not trying to emulate 112 amps with 254 microphones, but creating a plug-in that includes only a few amp heads, plus the complete recording chains of both Brainworx in Germany and The Mix Room in Burbank, California, where a lot of my favourite CDs have been mixed; I thought that would be a perfect studio to capture some recording chains — including speakers, microphones, pre-amps, consoles, and EQs — that have been used on many real-life productions for world-class acts!”

Which is exactly what Dirk did — with a little help from friends like The Mix Room owner Ben Grosse (producer/mixer for the likes of Slipknot, Alter Bridge, Disturbed, and Marilyn Manson), and exactly what makes the bx_rockrack plug-in sound like it does: a choice collection of high-end guitar amp models that exactly emulate guitar recording in the highly-coveted Brainworx studio or The Mix Room — complete with several selectable high-end guitar cabinet and microphone combos, as used in those real-life, world-class recording chain capture sessions held on both sides of the pond.

Unlike most other guitar amp plug-ins, bx_rockrack can be controlled just like a real amp and small effects rack; moreover, with so many perfect-sounding set-ups to choose from, its recording chains need not be edited or altered — simply select the cabinet, microphone, studio, and… keep on rockin’ in the real world! A nice-sounding vintage delay, noise gate, and high-quality guitar tuner are also at hand, helpfully, while some innovative Brainworx filters speedily shape amp set-ups with ease.

bx_rockrack can easily be played live since it offers a CPU-friendly, ultra-low-latency engine, so multiple instances can comfortably be run on any modern computer. The basic version includes the amps, recording chains, and Effects Rack, while the soon-to-be released PRO version will offer additional guitar-orientated plug-ins, plus an ability to use the bx_rockrack recording chains with other guitar amp plug-ins, or even real guitar amps via their line-out connections to the computer.

Why practice ten years to get your guitars to sound like the pros? Buying bx_rockrack instantly delivers reputation- building results previously only possible in the best rock recording studios direct to your (desktop) door. Or into your lap (top). No speaker emulator required. Got a guitar? Why wait at all?

bx_rockrack. The first guitar amp simulation plug-in.
Available in 64- and 32-bit versions, Brainworx’s bx_rockrack plug-in can be purchased and downloaded (in all Mac OS X and Windows formats — VST 2.4, VST 3, RTAS, AU, AAX) for an introductory price of $199.00 USD until July 30 (rising to $249.00 USD thereafter) from here: plugin-alliance.com/en/plugins/detail/bx_rockrack