M/S is a stereo technique which is used in almost all of Brainworx (BX) audio plug-ins. The BX saturator is a M/S 2-band saturation tool (4 bands in total). Every band has its own parameters for amount of distortion (called XL), distortion drive, pre/post options as well as saturation compensation settings. In addition you have at a global level a master XL parameter as well a master drive parameter. For both the M and S channels you have two separate crossover selections as well as separate gains. For convenience there is an added mono-maker with a frequency control parameter. 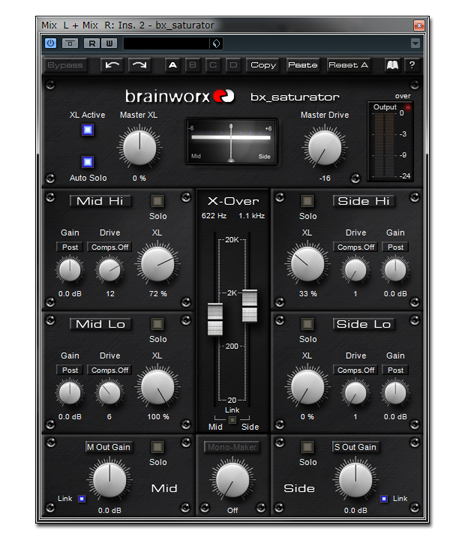 Every band has its own solo option and so do have the M and S channels as well which can be turned on automatically with the Auto solo option. There are 4 slots for quick comparison, undo/redo, copy and reset options and a quick link to the manual. Just like the controls the manual is compact and explanatory. Most people even won’t need to have a look at the manual. They most likely would just install the plug-in on their system. Maybe have a little trouble with getting the software registered like I did. But then be able to use it instantly.

During mixing you can use the plug-in on a mono (with only M channel active) or stereo channel. Per band you can adjust the saturation from subtle to not so subtle at your own taste. For me it makes sense to have this plug-in after EQ and compression just in order to make up for may be too much compression or EQ. Unlike an exciter you can have saturation on the lower frequencies in both M and S bands separately which allows you more control. But they both share the same opportunity to overdo the effect. Especially when your ears are fatigued you’ll may be tempted to dial in just too much. But then again with today’s loudness war levels apparent distortion isn’t considered as a bad thing by quite a lot of people nowadays.

While trying out different type of sounds I did notice that the distortion with acoustic instruments or voices added more warmth. And it’s relatively easy to color the sound and give it more body or definition by changing the amount of saturation of the different bands. It’s easy to get fast results and tweak it a little later on. With digital sounding instruments like the older cold and harsh virtual analog plug-in it emphasized the digital character rather much. Even with the most conservative saturation compensation 1 level. With the less conservative compensation levels it even got worse. There are alternative saturation plug-ins which have a different result to that extend but it still remains a matter of taste. Perhaps BX could add different saturation models to a revised version of this plug-in.

As an experiment I did try and use the BX saturator in a different way by going overboard with the saturation settings and using it on layered kicks and other percussion sounds to get a gritty sound. The trick would be not overdoing the drive because that eats up too much of the punch (of the kick). On techno or hard style related music styles this plug-in could be a welcome addition of your arsenal.

Using the BX saturator during mastering is more or less a whole different story. If you want to keep your master as transparent as possible not coloring it with any saturation may be preferable. And if you decide coloring will add to the master you most likely would be most conservative with adding that little coloring with saturation. You’re more likely to use the BX eq2 or BX dyn eq2 to adjust the master and maybe add a tad of saturation with the BX saturator. This route will work fine if you want some decent and fairly quick results.

But since mastering may require some more detailed processing to me the limit of having 2 bands for M and S may be a bit restricting. Personally I’d prefer a 3rd band to be able to make a distinction between the mid-high end and high-end. In addition you may want to consider if you would like to have saturation or another effect like a dynamic one like e.g. adding transients. As well during mastering everything below and average of 4k most of the times doesn’t need any saturation because it often will create more problems than it may solve. But that isn’t set in stone either.

Verdict
All in all the BX saturator is a versatile tool for mixing especially on acoustic instruments and vocals. You even can go to a more extreme level with it if you need harsh sounds. In mastering it may be less versatile. Given the price in comparison with its competitors it’s not one of the most cheapest but has far more options than the majority.