iPolysix is an analog polyphonic synthesizer that’s been carefully designed to take full advantage of the 7.9-inch display of the new iPad mini as well as the iPad. Bringing together a sequencer, drum machine, and even a mixer, it transforms your iPad or iPad mini into the ultimate analog synth studio. Pack an amazing set of early-’80s analog equipment into your iPad, and time-travel back to the dawn of polyphonic synthesizers! 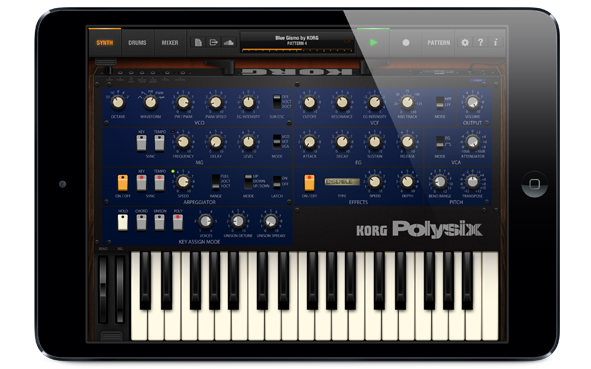 Today, functionality such as sound memories and built-in effects such as phase/chorus/ensemble are taken for granted, but at the time they were cutting-edge features that made the Polysix an instant best-seller around the world. iPolysix uses Korg’s proprietary “CMT” (Component Modeling Technology) to simulate the actual electronic circuits of the original unit, perfectly reproducing the original Polysix including its distinctively deep and rich pad sounds. Not content to rest with providing a faithful replication, iPolysix has also been extended with music production functionality and painstakingly tuned to be the most powerful Polysix in history. Its highly refined synthesis structure also makes this an ideal instrument for those who want to start learning about synthesizers.