Modestep have been re-writing the live music rulebook across Europe, introducing a new wave of ‘Dubstep‘ and ‘Electronic-Rock Fusion‘ to the masses. Formed in 2010 by brothers; Tony and Josh Friend with Matthew Curtis and more recently Nick Tsang, the group started performing Dubstep vibes with soulful vocals (Josh), later adding rock elements to their music to create the familiar sound known today through UK chart hits such as “Sunlight” and “To the Stars”.

To coincide with the new “Evolution theory” album launch the band are heading around the UK to promote the new release, starting early February. Denon DJ are proud to be Tony’s choice of DJ gear as he tours across the country with the band, showing off his skills on two Denon DJ SC2900’s and utilising Denon DJs flagship mixer:  the DN-X1700. 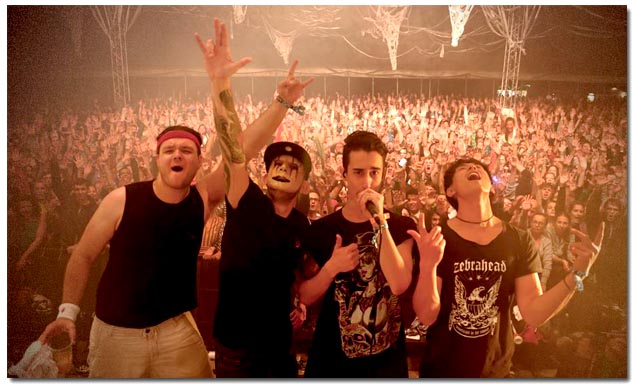 Every detail was considered and no corners cut in designing the DN-X1700 and its accurate sound representation. The mic amp, with its own discrete transistor configuration, incorporates a low equivalent input noise of 127 dB while even the phono amplifier has a 89 dB signal-to- noise ratio, all due to its own discrete FET circuit configuration.

Unlike any other DJ mixer in its class, the DN-X1700 is equipped with a high performance 32-bit DAC (digital analogue conversion) at the audio output stage.  Even the world’s best-selling DJ mixers, CD / DVD players and home theatre systems boast only 24-bit DA conversion; 32-bit conversion provides additional “headroom” in the conversion process, providing an analogue output signal with greater resolution and frequency response. The resulting ultra wideband output signal makes the DN-X1700 one of the best sounding pieces of digital audio equipment ever made for the DJ market.