2013 marks the bicentenary of the birth of Italian composer Giuseppe Verdi, and to honour the occasion, the Fondazione Teatro La Fenice decided to perform Verdi’s famous opera ‘Otello’ in the stunning outdoor environment of the 15th century courtyard of the Palazzo Ducale, in the heart of Venice. The event revived a tradition of presenting outdoor performances at the Ducal Palace that ran from 1949-67, and the work itself is a passionate tribute to the city. 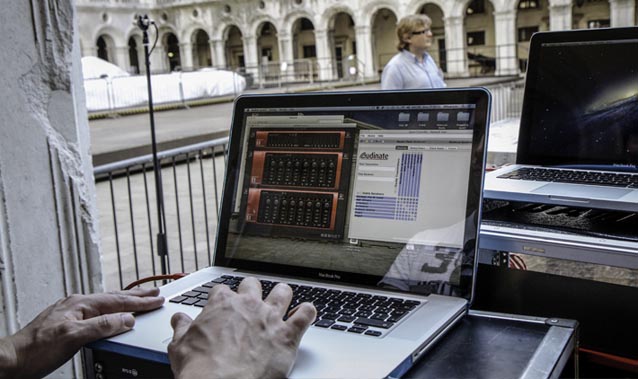 In addition to a series of live performances the concerts also needed to be recorded, which gave sound engineer, Antonio Martino of MASclassica a problem in that he required a large number of ultra-reliable, remote-controlled mic pres and audio channels of exceptional quality to be installed unobtrusively, at a significant distance from the recording system. Another challenging requirement was that the setup needed to be installed and then stripped down in the shortest possible time. What system would check all the boxes?

For Martino and fellow engineer, Claudio Speranzini, the perfect solution was RedNet, Focusrite’s flagship range of studio-quality networked audio interfaces that harness the power of the robust and reliable Dante Ethernet-based audio networking protocol. RedNet enabled Martino to place inputs exactly where they were needed around an extensive set involving the 40-piece Orchestra and the Chorus of the Teatro La Fenice plus the Venetian Little Singers and an extensive roster of leading soloists, all under the baton of Myung-Whun Chung.

Martino used four RedNet 4 units – each providing eight of Focusrite’s latest and most transparent remote-controlled mic preamps – for the on-stage microphones, employing 16 channels for the orchestra and another 16 for the choir, stage and audience microphones. Two RedNet 4s were located at the front of the stage and two at the back.

At the side of the stage a RedNet 1 unit providing eight line-level inputs and outputs with premium A-D/D-A convertors was used to bring audio in from wireless mics and to output monitoring feeds.

All of the RedNet units were connected to a common gigabit network switch via standard Cat 6 Ethernet cable, which was plugged directly into a MacBook Pro running Steinberg’s Nuendo software for recording. A second MacBook Pro was used to capture a backup copy from the same network.

Martino explains, “For me, one of the most interesting aspects of this installation – in common with other projects where I’ve used RedNet – was how simple it was to interconnect the modules via a single Ethernet cable. We could use extended cable runs, sometimes as long as 40 metres, without having to resort to tens of metres of analogue cables, snakes or whatever. In addition, the ability to remote-control the units allowed us to place the preamplifiers extremely close to the instruments to capture the very best sound.” 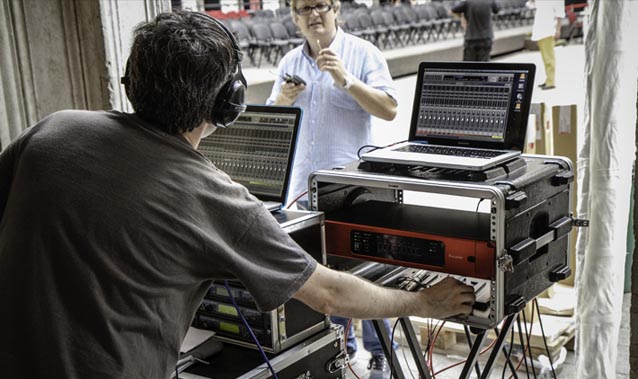 As far as RedNet’s sound quality is concerned, Martino says: “I found the quality and transparency of the mic preamps was excellent: not only on this project but also during our recording of Rossini’s opera ‘L’italiana in Algeri’.” The latter performance was recorded in the Teatro Rossini at the Rossini Opera Festival in Pesaro.

The simplicity of Dante networking made it possible to build an exceptionally flexible and easily configured system in a very short time. It also delivered studio-grade sound quality with Focusrite’s traditional mastery of digital conversion and legendary transparent, accurate preamps.

The performance was shot with 11 cameras on HD video and will be broadcast on Sky Classica in Italy on Giuseppe Verdi’s birthday in October, as well being scheduled for disc release.

New to the RedNet range are RedNet 5 and RedNet 6, which provide a bi-directional bridge between the Dante audio network and Pro Tools|HD or MADI systems.