Blue Cat Audio has released Blue Cat’s MB-7 Mixer 2.1, a new version of their multiband processing plug-in with VST hosting capabilities. This new release mainly brings workflow enhancements, such as copy/paste capabilities, plug-ins layout restore, direct access to bypass and editor window, as well as plug-ins compatibility improvements.The free broadband add-on skin has also been updated to include the new features and streamline the usage of the plug-in in single band (broadband) mode. 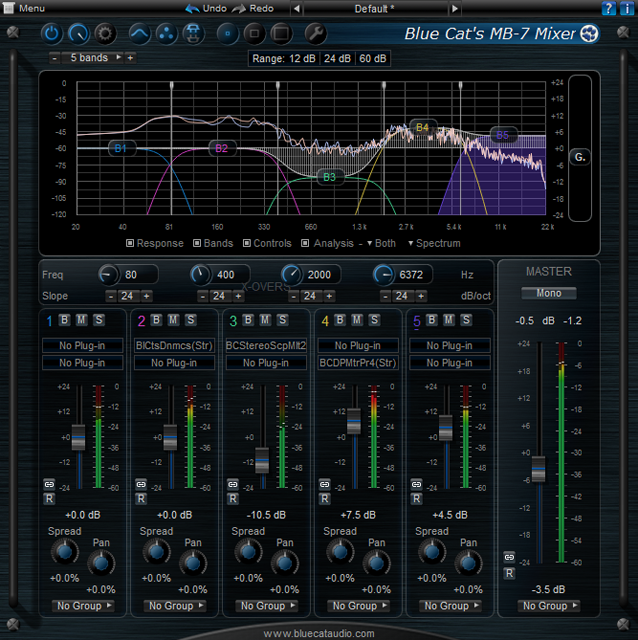 The plug-in can be purchased alone or as part of three bundles. Demo versions are available for download, in VST, RTAS, AAX, Audio Unit and DirectX formats, for both Mac and PC (32 and 64-bit).

– Bypass and display editor commands are now directly available from buttons in the plug-in slots.

– Plug-ins editors can now be restored on open (position on screen is now saved in session and presets), with an option in the preferences to disable restoration.

– Copy/paste plug-ins between slots using the system clipboard (you can copy paste between instances, or in different applications).

– Copy/paste the plug-in’s current state from the presets menu using the system clipboard.

– “Center Plug-in Editor” command to bring back plug-ins editors that may be lost on the screen.

– Improved support for plug-ins with multiple I/O configurations (the number of channels is now passed to the plug-ins).

– (Mac) plug-in version number is now available when using “Get Info” in the Finder.

– (Mac) RTAS version could cause some GUI issues in Pro Tools with some plug-ins (blank windows).

– (Mac) About window does not show up first in the corner of the screen.

– (Win) Alt-Click on a control now resets the value to default in Pro Tools, as expected.