And they named it ‘FLOW‘! Mixed In Key have released their DJ mixing application that they announced a while back and where you could suggest its name. This new application is not just another DJ mixing program, according to MIK it’s a world-exclusive: the decks allow you to beatmatch and crossfade inside the same track. 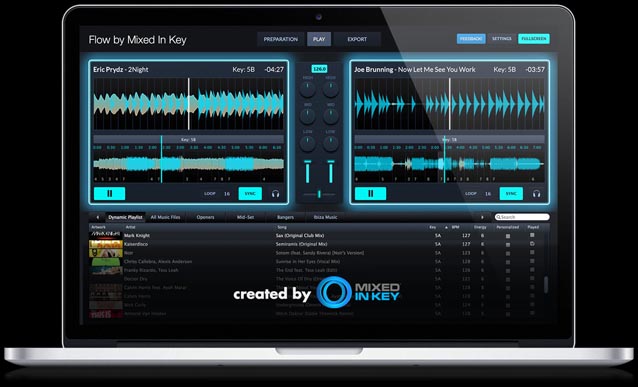 Flow by Mixed In Key

Mixed In Key is pleased to announce the release of Flow DJ mixing software. Designed from the ground up to be exactly what we wanted mixing software to be, Flow introduces an entirely new workflow to DJing that is as immediately comfortable as it is unique. Combined with a unique feature set that emphasizes simplicity and creativity over clutter, Flow produces truly original, exciting results from any DJ.

Flow’s clean interface is divided into three parts: Preparation, Play, and Export. Having three separate screens provides a natural workflow for DJing. You can preview your music, create playlists, and prepare your set in the Preparation view. It’s like iTunes for DJs. The Play screen is focused on playing on stage, with minimum distraction. The Export screen allows you to re-visit every DJ set you’ve played using Flow.

Another strong feature that’s unique to Flow is the ability to mix between different segments within the same track. You can re-arrange the song while it’s playing live to create your own remixes. One of our favorite quotes from the beta was: “This is like playing with LEGOs.”

The groundbreaking Energy detection is also featured, which allows you to see how energetic your songs and their segments are on a 1-10 scale. This allows you to know which songs and parts to play at just the right time – at a glance.

The algorithm from the forthcoming version of Mixed In Key’s latest key detection software “Mixed In Key 6” is also included. This, in tandem with their Energy and BPM detection, introduces another exciting first: the Dynamic Playlist. This helps you find compatible songs to what’s currently playing, making it much easier to sort a large music collection quickly.

Flow DJ Software is now available for $58, and works on both Windows and Mac OS X. It supports all MIDI controllers, but can also be used with just a mouse or touchpad.