M-Audio presents the new Oxygen controller series at the MusikMesse this year. Created for musicians and producers, they introduce a host of controls, an intuitive layout, and a cuttingedge software suite for making music. Available in 25-, 49- or 61-key models, the Oxygen series combines a velocity-sensitive keybed with a series of 8 trigger pads. Used for launching audio clips, triggering percussion sounds and more, the pads also provide velocity-sensitive response and illuminated feedback. Control capabilities expand with 8 assignable knobs – perfect for adjusting plugin parameters and mixing tasks. 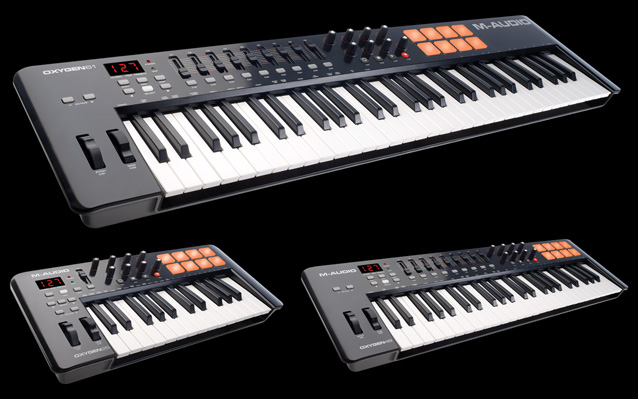 The Oxygen 25 features an assignable master fader while the Oxygen 49 and 61 provide 9 total faders for virtually limitless MIDI manipulation. Each keyboard in the series features an LCD screen and transport controls for seamless operation with digital audio software. A 6.3mm (1/4-inch) sustain input jack is built in for expressive performances.