Three-time GRAMMY-winning producer, mixer and recording engineer Vance Powell is a dyed-in-the-wool analog purist. He also happens to know what it takes to make great records. His unique, analog-centric style enhances every track he touches — from collaborations with local Nashville bands to major releases like the acclaimed Jack White album Blunderbuss. Although his studio approach is analog all the way, Vance likes to leverage modern technology—like iZotope’s RX audio repair suite—to achieve sonic perfection. He talked with us about what it’s like being an analog guy in a digital world—and revealed how he and Jack transformed some unfortunate studio mishaps into unique tones that might leave you wondering, “how did they get that sound?“ 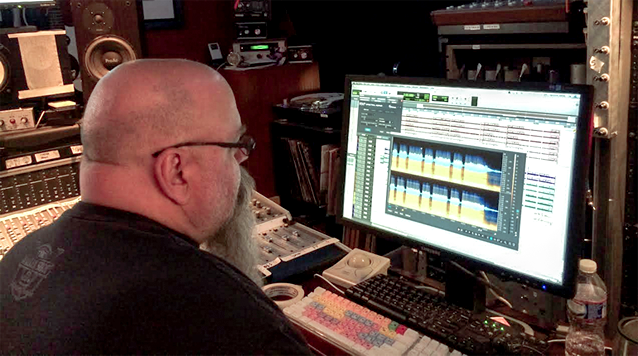 What led to you getting into audio?

Around the time I graduated from high school, some friends of mine had a band. Since I was always the kid with the cool stereo, they asked me to do their sound. I quickly found out that I liked working with audio more than anything else. That blossomed into doing live sound engineering for many different artists. Later on I got a gig at a small local studio and worked there recording different artists and doing some low-budget mastering — all the while continuing to tour with different musicians.

In 1992, I moved to Nashville and started doing live sound for the famous country singer Tammy Wynette, best known for the song “Stand by Your Man.” During the 90s, I actually stopped recording for a while since I was so busy touring. When I got back into studio work in the early 2000s, a lot had changed. You have to remember that I grew up in the land of tape, using large multi-channel consoles and analog recorders. So working in the digital environment was strange, and rather un-enjoyable in a way. Around that time, I helped record an album that went on to be quite successful — but because of the digital format, it never sounded right to me.

Eventually I moved on to Blackbird Studios, where I helped put together a multi-million dollar facility. It was there that I met Jack White. We hit it off immediately and started working together. His ethos of using analog tape without any digital manipulation felt like coming home to me.

How have your analog roots influenced the way you work today?

I record onto tape most of the time. But even when I do record into Pro Tools, I use an analog approach. That means using smaller track counts, consolidating multiple tracks into one, and so forth. Rather than recording every mic of every session on a separate track, I use Pro Tools like an analog recorder.

I just don’t like a lot of tracks. Piling more tracks into your song is like putting stickers on your car — it doesn’t give it more horsepower. I’m not trying to be a throwback or anything, but I do believe that what matters most is the quality of the recording — not the post-processing work that happens afterwards.

How has your live sound background influenced your approach in the studio?

In the live sound environment, you have to make choices — and make them fast. That translates directly to how I approach making records in the studio. If I’m spending endless hours deciding which snare sound to use, that’s just wasting someone’s time and money. And very few records are bought on the basis of how the snare sounded.

Just like in live sound, the song has to quickly come together around the most important elements. If I can accelerate that process by helping the artist get the right sound quickly, then I’ve done my job well.

You’ve been in the business a long time. What are some of the skills and talents that make a good engineer?

The ability to be flexible is key. It’s also important to make the best of situations when challenges arise. As an audio engineer, you need to do your job well, understand and capture what’s important about the song, and lightly put your thumbprint on it so when someone hears it, they recognize your work.

Do you have a “sonic thumbprint” that’s common across your projects?

I think that if you compared songs I’ve worked on over the past 5 years—even with the artists all being different — those records would share a similar sonic character.

Every engineer has a way they like to hear things, and that’s the sonic thumbprint that translates into their projects. For me, I like big, long snare drum hits that ring out and have a lot of bottom snare sound… But at the same time I’m not trying to bring the epic 90s drum sound back. I just like the snare to sound right in front of you — and the guitars to sound like they’re inside your ears.

On the other end of the spectrum, there are things I don’t like — namely things that aren’t real. It may sound strange, but I don’t have a single digital reverb in my studio. The only time I might use digital reverb is when I dial-up a plug-in — and even then, it’s to emulate a piece of analog gear! I own two big springs, and those are my go-to reverbs for everything. And I have a huge wall of tape echos and analog delays that I love to use. I like echo a lot more than reverb, and that’s part of what makes up my signature sound.

Having worked on so many records over the years, you’ve probably had things go awry from time to time. What are some of the most interesting challenges you’ve overcome during a session?

We’ve all had sessions grind to a halt for one reason or another. But sometimes an accident can yield something really cool.

For example, consider the track “Take Me With You When You Go” from Jack White’s latest record, Blunderbuss. The guitar solo, which starts around 2 ½ minutes in, has this interesting, super-distorted tone — and it’s 100% the result of an engineering mistake on my part!

We set up a pair of microphones in an isolation booth to record both acoustic guitar and Jack’s electric guitar amp. When it came time to track the solo, I accidentally patched the acoustic guitar microphone — which already had a preamp on it—into another preamp. So the mic already had about 70dB of gain on it, and I patched in into another pre which added 30dB of additional gain. And to make matters even worse, I used the mixing board’s mic input instead of line input, which essentially created three preamps stacked on top of each other. When I cracked the fader on the board just a half inch, this incredibly distorted, fuzzed-out guitar sound came out. I just looked at Jack and said, “that sounds awesome—whatever that is, we have to use it.” And that’s what you hear on the record.

It’s incredible that you discovered and captured such a unique tone by mistake.

Yeah, you can’t plan that kind of stuff, it just happens. Something similar happened when we were mixing “Another Way to Die,” the theme song from the James Bond movie Quantum of Solace. Jack wanted to create a low-octave harmony on his guitar for the intro. So I dialed up an Eventide H3000 Ultra-Harmonizer, and just turned the send knob to see if it was working. When I turned it up, this incredible sound just blared out. And that ended up being the distinctive two — octave guitar sound that kicks off the record.

But here’s the interesting part. When we printed the track, I realized how that sound came about—the aux send knob on the API console was cranked, so we were slamming the H3000 at about +25 of gain! We were hitting the harmonizer so hard, it was in full clip, and that digital distortion is part of what created Jack’s intro guitar sound.

Working with tape, you probably come across lots of noise, hum, and hiss issues. How have you used iZotope RX to combat those problems?

iZotope RX has become a go-to tool for me. Every now and then I come across cool sounds at the beginning or end of recordings—sounds that you’d normally never use because there are count-offs and other noises interfering. RX helps me salvage performances that would have otherwise been unusable.

RX helps me salvage performances that would have otherwise been unusable.

For example, I recently mixed a project where, at the end of every song, the drummer set his drumsticks down on the snare and caused a click noise as the cymbals rang out. At first I thought, “how am I going to use these tracks?” But thanks to the RX Spectral Repair tool, I was able to easily remove that click sound. The cymbals remained untouched, while the unwanted drumstick noise disappeared. It was amazing.

I also used RX recently to fix a project that someone had recorded on analog tape. They recorded the tracks the same way you’d record to Pro Tools — with 14 drum mics, each one taking up a separate track. When you combined the drums tracks together it made for a pretty ludicrous amount of noise. Many people don’t realize that back in the analog days, we didn’t record just 4-6 drum tracks because we didn’t have the tracks — we did it to maximize the amount of signal per track and prevent noise from building up. Using 24-track tape, you can’t record individual drum and cymbal tracks hot enough to justify capturing separate mics. So on that project, I used RX to remove tape hiss on the quiet parts of each track. That way, when I combined the tracks, most of the noise was gone.

The best part was, RX cleaned up the tracks without destroying the tone of the drums and the transients. RX is the first tool I’ve used that can remove noise, hiss, and other issues without affecting the sound. Other noise reduction tools make everything sound soft.

RX is the first tool I’ve used that can remove noise, hiss, and other issues without affecting the sound.

What other iZotope products find their way onto your tracks?

iZotope products are top-notch, all the way around. I’ve used Ozone, RX, Trash and Vinyl on projects and they are all great.

Tell us about winning the GRAMMY for best-engineered album (non-classical) on The Raconteurs’ album Consolers of the Lonely?

It was awesome. It’s a dream come true when you win something like that, because you know your peers have voted on it. Consolers of the Lonely is a really great record and I was lucky to be involved.

What other projects are keeping you busy?

I produced, recorded and mixed the new Black Prairie record Fortune, which has just come out. I also have a new record coming out with the Ben Miller Band. Check it out this summer!