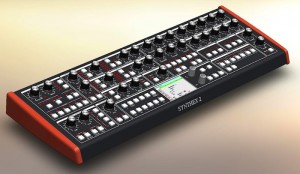 For a small number of experts, it was not even a novelty that Mario Maggi, between a project and the other for the most diverse branches of industry, was putting their hands at a general revamping of its prestigious polyphonic analog to propose then to vast number of electronic musicians.

In practice, this is not a clone but a totally new design utilizing advanced and powerful technologies, while maintaining the character and peculiarities of the original version.

Many things could be told, and many can not recount – as we are bound by a non-disclosure agreement that binds us for quite some time. Whatever the reason, aided by the recent (and unexpected) exploit Finnish, today Mario has decided to disclose a first set of features of the new project, which could have lead times and marketing much shorter than you might think.

The new Synthex 2 is a polyphonic instrument to eight voices, which is intended to be marketed in both tabletop format (only the control panel) with the keyboard 5 octaves; at this stage, the question “is analog ‘”, Mario Maggi says that for the project are used in technology solutions HIDEA (HI gh DE finition rchitecture A),with the basic objective to get the highest quality sound along with a very high definition, precision and repeatability of the control parameters.

We could hear the operation of the oscillators and filters: the result is – to say the least – exciting! In oscillators, you can handle all that comes to mind with absolute control; pitch and detune (and offset in Hertz), waveforms, modulation and intermodulation with very extensive tonal possibilities offered by functional strategies put in place over the harmonic content and frequency – imagine having, at its available, a “super OTO Biscuit” ready to make even complex waveform of each oscillator, multiplied by 100 what could be done with the two RingMod old Synthex and you’ll still far from reality.

The filter, thanks to a new control parameter, can reach and exceed behavior more classics give his side their traditional limitations. Better yet, it may sound new and different and personal. The relationship between the input signal, behavior and quality of resonance, transfer function selected, “flavor” end, leave you breathless.