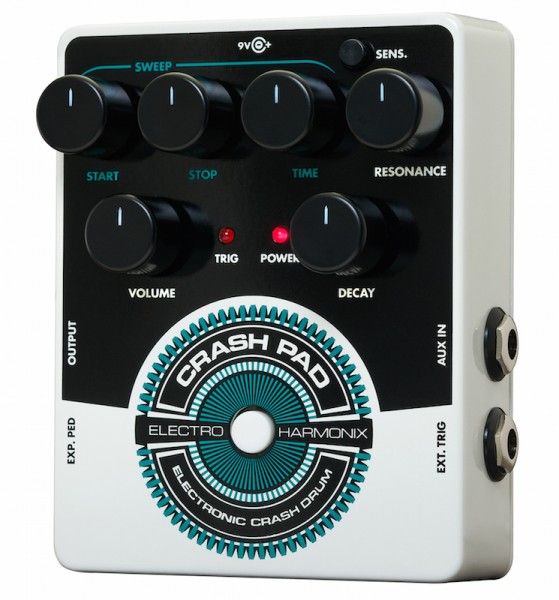 EHX’s rich history is marked by many avant-garde pedals, but one of the most distinctive was an analog drum synthesizer dubbed the Crash Pad. Responding to requests for modern re-makes of vintage gear and sounds, Electro-Harmonix is bringing back the Crash Pad’s original circuit in a modern package. Our new Crash Pad remains faithful to the sound and vibe of a vintage Crash Pad while featuring fresh updates.

Like the Crash Pad from 1980, the new version can create drum sounds ranging from cymbals to snares to other-worldly oscillation sweeps, and can process external sounds thru its resonant filter. The pedal is triggered via the on-board pushbutton or an external (non-MIDI) drum pad. It also responds to expression pedal/CV input for external control over the filter in real-time. The Crash Pad is housed in a rugged die-cast chassis and comes standard with an EHX9.6 DC-200 PSU; it also accepts a 9V battery

The Crash Pad is sure to appeal to players who love analog synths and vintage sound with modern control. It’s very cool all by itself and also works especially well in combination with pedals like the EHX Clockworks Rhythm Generator/Synthesizer and 8 Step Program.