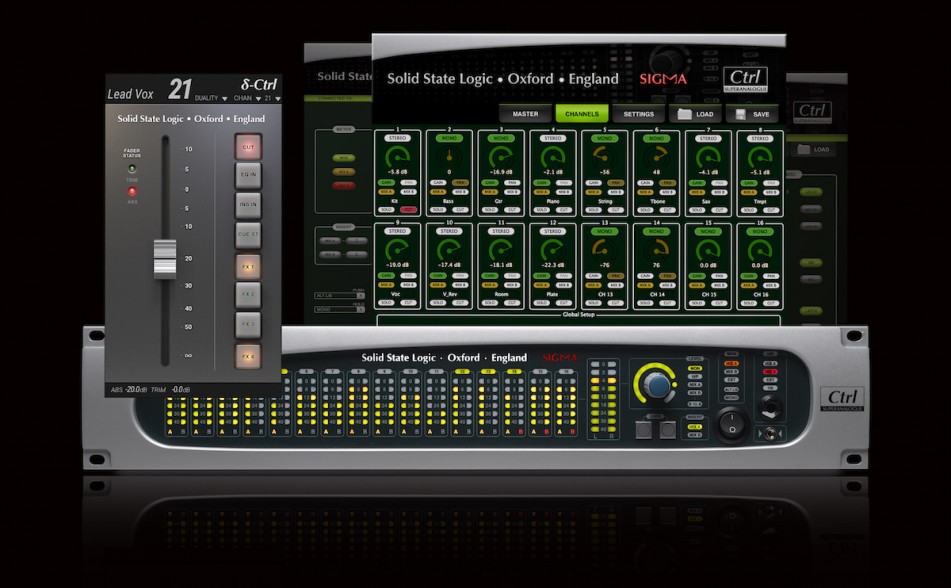 New direct control via MCU using MIDI over Ethernet is added to enable SSL’s Nucleus controller and Sigma to be used together as a standalone rack mount line mixer with remote hardware control without the need for a computer or Remote Control App to be running. When all three control systems are in use, changes on one are reflected across all three interfaces.

Already introduced for Duality and AWS consoles, and now available for Sigma, SSL’s δelta-Control (δ-Ctrl) system uses DAW plug-in architecture to enable analogue signal path automation from your DAW. The introduction of δ-Ctrl for Sigma streamlines both working with Sigma as a standalone mix environment and transfer of sessions prepared using Sigma to Duality or AWS equipped studios.

The main interface for δ-Ctrl is a native AAX/RTAS/VST/VST3 plug-in that allows automation of Sigma channel volume as if it were a DAW Plug-in. The automation system in the DAW is used to record and playback Sigma volume control data entered either directly from the fader in the plug-in GUI or from an MCU control surface which is controlling Sigma directly. The δ-Ctrl plug-in is inserted into a DAW mixer audio or aux channel. The plug-in then receives and sends volume data from Sigma δ-elta via a high speed Ethernet Network connection.

Audio on the DAW track passes through the plug-in slot unprocessed so the plug-in can be combined with other DAW plug-ins. Sigma’s Volume and Mute switch are represented as plug-in parameters in the δ-Ctrl plug-in GUI and their automation data is recorded to the automation lane of the selected DAW channel. In playback the plug-in converts the stored automation data from the DAW into δ-Ctrl messages and routes these back to Sigma via the SSL Logictivity Network connection.

Automation data can be viewed and edited as normal plug-in data in the DAW tracks. Sigma’s volume data is saved using the same dB law as your selected DAW track volume data so that the ‘Paste Special’ command can be used to copy existing DAW fader data into the plug-in. The Paste Special feature is available in Pro-Tools and in most but not all DAWs.

About the new Remote Control Application

The Sigma Remote Control Application offers full control of all Sigma functions plus store and recall of saved settings. It runs on a Mac, PC or tablet device (IOS and Android) and connects to your workstation via Ethernet (or wirelessly from a tablet). The user interface provides a series of intuitive pages that make controlling Sigma’s powerful feature set straightforward. Three main screens provide control and setup of the Master Section, Channel Control and Global Settings parameters. Every parameter can be saved for future recall making swapping between projects simple and efficient.

The introduction of MCU control of Sigma facilitates direct control over the Sigma analogue mix path and monitor switcher from SSL’s Nucleus DAW controller or any other Ethernet equipped MCU enabled hardware control surface. Sigma’s MCU control requires no DAW software to be active, neither is there any requirement for the App to be open or even for a PC to be running. MCU control simply requires a 16 fader MCU compliant surface to be connected via a Network cable to the same DHCP server or router that Sigma is connected to. The Nucleus/Sigma fusion becomes a fully integrated 32 into 4 automated line mixer, with full monitoring and talkback capabilities.  Sigma can also be used in combination with Duality, AWS and Matrix to add additional automated mixing capacity. Inserting Sigma δelta across the insert points of an XL desk, instantly adds automation to the console.

Third party controllers with MCU emulation will also function but channel banking is not supported at this time so a single 8 fader controller can only access the first 8 channels. Writing automation from an MCU Control Surface connected to Sigma is not supported with Logic Studio. Sigma δelta will be available from Dec 2015.